It’s amazing how reading a book published 25 years ago at times seemed like it was written in present day. Such was the case with What Women Want (Penguin Group, 1996) by Patricia Ireland.

Unfortunately, women still want so much of what Ireland writes about. Equal rights, equal pay, control over the decisions about our bodies—the list goes on. Maybe one day the efforts of her generation, those who preceded her, as well as the women (and men) who are following her will achieve what seems like basic rights. 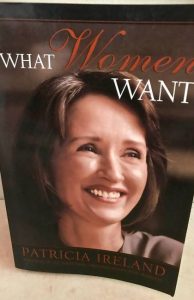 Ireland was the president of the National Organization for Women when she wrote this autobiography.

Reading her life story is a journey through the struggles of women up until the turn of this last century. Ireland wasn’t a born activist. She was a late bloomer in some ways. Her experience as a flight attendant (known as a stewardess in her day) and then corporate attorney helped form her beliefs as a crusader for women.

While it was interesting to learn about Ireland’s life and how she evolved into the women she became, the book is such more than one woman’s life experiences. It’s also much more than a look at NOW. It is a history book of sorts about women’s rights, or at least the struggle for them.

It’s as relevant today as it was when it was written, perhaps even more important to read today.