While I have spent some time in Oregon and Washington, the two states clearly deserve more of my time and attention. 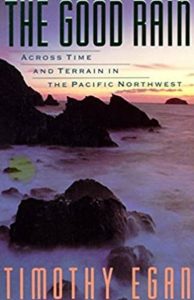 “The Good Rain” is part history book, part travelogue. While it was a bit slow to get into, I am glad I stuck with it. I learned so much. At times I felt transported to the locations Egan so eloquently describes.

Other times I was angry—mostly at the government and those who chose to selfishly wreck the land without thought to those who were using it first and those who might come later. Clear cutting forests, depleting the salmon population, damming rivers—they all have consequences that we are living with today.

The way Egan describes the landscape, some of which is still wild to this day, is captivating.

Throughout the book he weaves in people who make the subject matter more personal and at times more relevant.

This is a book for those who want to learn about a part of the United States they may not know much about and definitely if you want to escape the realities of today.