Book review: History of racism a lesson we should all learn

It amazes me how much I don’t know. That is the feeling I kept having as I read Stamped from the Beginning: The Definitive History of Racist Ideas in America (Nation Books, 2016).

It could be the one and only book that people should read to understand racism in the United States. For all the people who say slavery ended more than a century ago and that black people need to move on, this book is for you. For those who want a better understanding of how we got to where we are today, this book is for you. I can’t imagine anyone who should not read this book—no matter color, political affiliation, or other distinguishing characteristic. 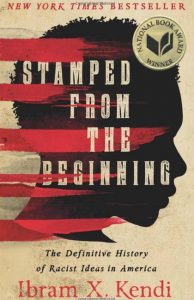 Author Ibram X. Kendi doesn’t need to interject his opinion, the facts speak for themselves. Kendi is also the author of How to be an Anti-Racist, another book I recommend. He is the founding director of the Antiracist Research and Policy Center at American University, as well as professor of history and international relations, author, and columnist for The Atlantic.

This isn’t an easy read. In many ways it’s like tackling an interesting text book. I read part of it and listened to the audiobook. Both were engaging.

It’s not just whites who are racist. Kendi points to the actions and beliefs of blacks that perpetuated racist behavior. Much of the racism, though, is rooted in what they were taught. It is an evolution of sorts to understand the complexities and subtleties of racism. Racism is woven into the fabric of most aspects of life in the United States; which is why it is so hard to abolish it.

While the historical realities—decades ago and more recent—can be sobering, Kendi in the epilogue leaves readers with hope. Change, though, is going to be up to us.