Clearly, John Irving has a much more vivid imagination that I do. I kept turning the page, never quite sure where I would end up.

Irving is one of my favorite writers, but until this year I had not read “The World According to Garp” (Pocket Books, 1976). Perhaps it is because I had the seen the movie with Robin Williams. That viewing was so long ago I should revisit it to be able to do a fair comparison. 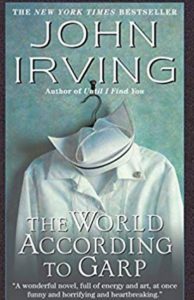 Garp is a man whose beginnings started in an uncommon manner with his mother taking advantage of a serviceman who was dying, but still had the ability to procreate.

It’s hard to believe the book is more than 40 years old based on some of the themes – like women’s rights. And, yet, based on the time this was written it’s not surprising. Really, it’s just sad some of issues are still relevant today instead of having been resolved or rendered a footnote in history.

It’s not that this book is political. It is truly a work of fiction by a writer who knows how to captivate his audience. Through Garp the reader is taken on a trip through what it’s like to be a struggling writer, the perils of infidelity, family strife, and love between unlikely allies.

“Garp” is funny and sad. It will have you shaking your head with the absurdity as well as the reality.