Book Review: ‘Killers of the Flower Moon’ an important story

The Osage murders is another chapter in U.S. history that isn’t part of the education system. We have author David Grann to thank for bringing this disturbing history to light in his book “Killers of the Flower Moon: The Osage Murders and the Birth of the FBI” (Doubleday 2017).

Savages are what Indians were called. Truth is white people need to look in the mirror to see the true savage. 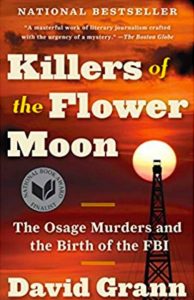 Grann takes readers on a journey through Oklahoma during the oil boom. The Osage Indians had obtained the mineral rights on their land from the federal government before anyone knew what lurked below. In the 1920s, the Osage were some of the wealthiest people in the United States.

Then the murders started occurring. To this day many have not been solved. It’s not even known how many of the Osage died during this multi-year killing spree. Many of the deaths were not investigated, let alone labeled as murder.

White people wanted the rights to the oil. Marrying into the tribe or overseeing an Indian’s financial affairs (another white man-government policy) was one way to get to the money. Instead of waiting for death to occur naturally, poison, bullets and bombings sped up the process.

While non-fiction books written by journalists are some of favorites, this one fell flat. It was dry, almost like reading court documents. While the writing left me unimpressed, it is the story that is the reason to read this book.

Grann also delves into the role of the FBI, which at the time was in its infancy. The latter chapters of the book point out how the FBI left so much evidence behind and that there is still more to know.