Lost on Planet China: One Man’s Attempt to Understand the World’s Most Mystifying Nation (Broadway Books, 2008) is not going to be a book everyone is going to enjoy. Of course a universally liked book probably doesn’t even exist. 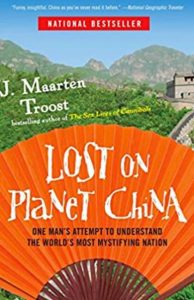 Maarten Troost, a native of The Netherlands who was bored living in Sacramento, went to China on the premise to see if that country might be a suitable landing spot for his family.

Readers are taken on an enlightening journey through China. Much of what he shared assuredly would not have changed in the last 14 years, and at the same time so much has in the world. Don’t even think about the pandemic. Think about how much more of a player China is in the world today.

This book is relevant as a travelogue. Having spent a couple weeks in China in 2011, I found what he had to say to be entertaining and spot on in many ways. Troost, though, had to figure out menus on his own; which included cattle penis with garlic. My dining adventures were much better because of being with my Mandarin speaking niece who lived in Beijing.