Flying down rapids in remote areas where what could kill you isn’t just the water – might be a crocodile or indigenous people or some parasite – isn’t for those who think Disneyland is a wild ride.

Richard Bangs in his memoir “The Lost River” (Sierra Club, 1999) transports the reader to rivers that had not been tamed until he and his buddies did so. Rivers like the Tezeke and Awash. 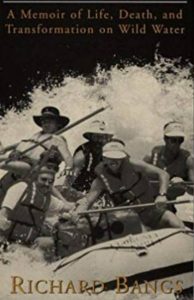 Much of the book is about his explorations in Ethiopia. But it also delves into how a simple camping trip with his father gave him the adventure bug, goes into how he started being a guide and his quest to go where no one else had.

While I have done a bit of rafting (a Class V on the Upper Gauley River in West Virginia and a week on the Colorado my most adventurous), what Bangs and his posse were doing is nothing compared to what I’ve experienced. In the earlier years the equipment was more primitive, the logistics sketchy and the unknowns just that – unknown.

I felt like I was along for the ride, which is a great compliment. It wasn’t just the experience of these waters – most of which I had never heard of – but getting a geography lesson, history lesson, and more.

I don’t ever want to experience what he did, but I feel richer for having read about his triumphs.

It wasn’t just conquests, though. Rivers are not always forgiving. Death is very much a real part of adventure sports. And so it was on these rivers.

Bangs doesn’t sugar coat what is going on, which makes this read like an authentic experience.

This is a book for anyone who likes adventure travel, and anyone who has been white water rafting.