Sometimes it’s good to read a book years after it was published. Such was the case for “The Mayor of Castro Street” by Randy Shilts (St. Martin’s Press, 1982.)

I knew the outcome. What I didn’t know was most of what happened before San Francisco Supervisor Harvey Milk was assassinated along with Mayor George Moscone. 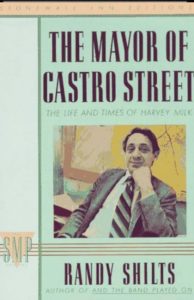 While this is very much the story of Milk’s life, it is so much more. It is also much more than a history about the gay movement.

Shilts, who was a reporter for the San Francisco Chronicle, weaves together the evolution of Milk along with the coming of age of the gay movement, while shining a light on the politics of the time. So many people think California and San Francisco in particular have been hot beds of the political left for eons. This books proves that this has not always been the case.

If you think U.S. Sen. Dianne Feinstein, D-California, is uber liberal, read this book. It will show you she doesn’t bleed dark blue.

The Briggs initiative, which would have done more than ban homosexuals from teaching in California schools, gets plenty of ink. (John Briggs’ son, Ron, used to be a supervisor for El Dorado County. His son-in-law Steve Bailey, who was a judge in the county, in November 2018 ran unsuccessfully for attorney general. Both share the elder Briggs’ conservative leanings.)

The book exposes the political machines that makes you wonder if the average person can effect change. Milk proved that tenacity can beat the system. Still, the power of the machine is daunting.

“The Mayor of Castro Street” is an incredible piece of history. For anyone with an interest in the gay movement, and San Francisco and California politics, this is a must read.