Travel books are one way to get acquainted with an area, but I prefer reading something more substantive to immerse myself in my future destination.

That is how I came across “Miraculous Air” by C.M. Mayo (Milkweed Editions, 2007). I had hoped to finish it before I made the drive down the Baja peninsula to Todos Santos; instead I finished it a week after completing that 1,000-mile or so drive. 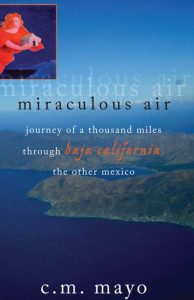 While the author’s journey was from the late 1990s, it didn’t matter. The relevancy of what Baja California is like still rang true in many ways. It was interesting to read about towns we drove through (we being me, my sister and my dog) and places that might be worth exploring.

History is a big part of what “Miraculous Air” is about – especially the missions. It’s not a religious book by any means, more historical. Having gone to public schools in California since third grade I was taught a little about the missions. What I was never in the curriculum was the missions of Baja. It was as though only what existed in the United States had relevance. Ah, our isolationist form of schooling.

The Mexico that Mayo writes about is still alive in some ways. Mexico has evolved. Still, though, it is very much a Third World country. She captures this in ways that those who have not experienced it may find backward or quaint. Those who live it find it normal.

It’s hard to imagine this book would inspire many to travel the peninsula. But, then, it’s not intended to. Instead it gives a peak into what life is like here, or least when she traveled to Baja.

For anyone interested in this part of the world, it’s a good read.