Book Review: ‘Nomadland’ so much better than the movie

It’s not often I have the preconceived notion I am not going to like a book. Why read it, right? Well, because I might be wrong. Such was the case with Nomadland: Surviving America in the Twenty-First Century (W.W. Norton & Company, 2017).

My apprehension going in was I had seen the movie that premiered in 2020. Even though it won best picture at the Academy Awards, I didn’t like the film. I did, however, see how Frances McDormand won for best actress and best director. 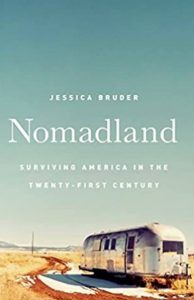 Like most movies that are adapted from a book, it is just a sliver of what is between the covers and rarely does the pages justice.

Author Jessica Bruder delves so much deeper into the lives of the people who are houseless—not homeless. There is a difference. These people have chosen to live in vehicles of all kinds for all sorts of reasons.

What Bruder doesn’t do is romanticize about what life on the road is like. Hers was a multi-year research project that included living and working among those she then wrote about.

It certainly gave me a better understanding of what life full time in a vehicle would be like, especially when you have to keep working. The horror stories of working at some of these places makes me never want to work at Amazon or pick sugar beets.

This isn’t a travel book about going to national parks and being on vacation without an end date. Many of the people in Nomadland had good paying jobs, owned real estate and then the Great Recession hit. They adopted a transient lifestyle to survive.

I became so interested in some of the “characters” that I would love for Bruder to write a sequel or perhaps a book focusing on just a few of the “stars” in Nomadland.