Thousands of lives were stolen or ruined in the first part of the 20th century all because one woman wanted to profit from stealing and selling children. 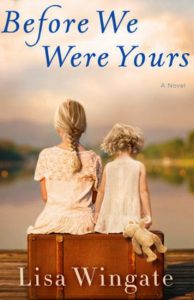 While Before We Were Yours (Ballantine Books, 2017) is historical fiction, the Tennessee Children’s Home Society run by Georgia Tann was very real. Between 1924 and 1950 this woman stole more than 5,000 children, and was responsible for the deaths of more than 500. Many were abused beyond being ripped from their parents.

Author Lisa Wingate weaves a captivating tale, focusing primarily on one family’s plight. In parallel story lines the book is set while the orphanage was operating and then in present day.

Like with many of the real families, the truth was hidden and stayed that way until generations later. Such was the case with the fictional family in the book. Wingate used composites of children from the center to form the characters in her novel.

While at times the book is gut-wrenching, it’s one of those sad chapters in the history of the United States that needs light shed on it. It is well written and definitely captivating.