Exhaustive, but not exhausting. That is how I would sum up A Promised Land (Crown, 2020) by Barack Obama.

It’s one thing to live through history, it’s another to have the former president of the United States give his unabridged take on events. 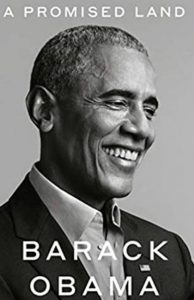 For the most part, this is more of a political book than a personal one. Still, there are personal moments in it.

It’s going to take you a while to read or listen to. It is so long—768 pages. I got it as an audio book from the library. My 21-day rental was not long enough to hear it all, so I listened to it with a gap. Not a problem. It gave me time to digest some of it before finishing it by the next deadline. Obama reads the book, making it even more captivating.

I kept wanting to listen because there was such a depth to the stories, to the news of the time that either I had forgotten or never knew about or it wasn’t shared in the moment.

I think most people can agree the challenges of being president are daunting. Obama shares with his readers (and listeners) what it was like to make the tough decisions. He touts his successes, is willing to admit to failures, and shares insecurities and doubt. It’s also about so many of the people on both sides of the aisle who he was interacting with regularly.

If seemed like it was honest retelling of events. It didn’t sound like he was trying to rewrite history in his favor, as a memoir can often be.

A lot happened in those eight years of his presidency. It was educational to relive what he wanted to share and have it put in context.

I was fascinated by this book.

While it will be seen as partisan based on whose memoir this is, it would probably be more educational for those who didn’t vote for him to read this book in order to understand Obama’s choices and thinking.