Book Review: ‘Queen of America’ a story of intrigue 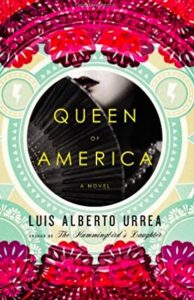 Even though “Queen of America” (Little, Brown and Company, 2011) is the sequel to “The Hummingbird’s Daughter,” it would not be necessary to have read the first one. However, I would recommend doing so. You will get so much more out of the second book.

Author Luis Alberto Urrea does a great job of weaving in key points from the original novel to explain certain things in the sequel. It was also a good refresher. I listened to the first book last June when I returned to the United States from Mexico, while the second one was my audiobook of choice last month for my travels north.

While these are both works of fiction, they are based on a real person. “Queen of America” begins with Teresita Urrea and her father fleeing Mexico for Arizona. Theirs is a complicated relationship, with her father not knowing of her existence for the first several years of her life. She possessed healing powers that invoked some to call her a saint. It’s a label she was never comfortable with, and one she could never shed.

“Queen of America” takes readers on a journey with Teresita into the 20th century in St. Louis, El Paso, San Francisco, New York and Arizona. It’s full of intrigue and twists. Love, marriage, death – it’s all part of the book.

Hearing the words recited by the author made the book come to life even more.