Even though I lived in Las Vegas while Kirk Kerkorian was still a presence in Las Vegas, I never knew much about him other than what I read in the newspapers. It was through the book The Gambler: How Penniless Dropout Kirk Kerkorian Became the Greatest Deal Maker in Capitalist History (HarperCollins Publishers, 2018) by William C. Rempel that I learned about him as a person, an entrepreneur, a risk taker, and the ultimate businessman.

Kerkorian (1917-2015) helped transform Las Vegas into what it is today. He is credited with developing the concept of the mega-resort. Three times he built the world’s largest hotel in the Southern Nevada desert. 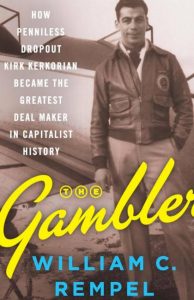 The fascination with gaming started as a player and evolved into owner/developer. He was the ultimate gambler as a businessman.

But before Kerkorian began his gaming empire his first loves were boxing and then aviation. His heroics at the controls of various airplanes is well depicted in the book. It was through his flying pursuits that he was him to Las Vegas.

Kerkorian’s life is the quintessential rags to riches American dream. Rempel deftly tells the story through extensive research. His subject was private and seldom gave interviews. Part of Kerkorian’s life is public through court documents—business and personal.

This story is sure to be one to captivate most readers.