Certain writers define their generation. Hunter S. Thompson was one of those people.

While plenty of people have dismissed Thompson because of his well-documented drug use and penchant to mix opinion with fact, the truth is he was a dynamic writer who had an ability to shine a light on politics in ways few people ever have. 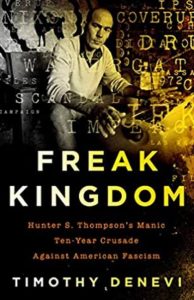 It’s been several years ago since I read many of Thompson’s books. Unfortunately, I did not hang onto them. I finally got tired of moving books so I’m starting over on my library. But that’s another story.

This story by Timothy Denevi about Thompson (1937-2005) is captivating because I learned so much more about the man. I learned how he understood the politics of his time almost in prophetic ways. His warnings about Richard Nixon fell on deaf ears. It made me wonder what Thompson would have written these last few election cycles.

This book is definitely for fans of Thompson’s or those who want to get to know him. Denevi includes plenty of examples of Thompson’s writings for readers to grasp Thompson’s unique style.

Denevi doesn’t make Thompson into a hero. All of his warts, idiosyncrasies and faults come shining through. This book felt authentic, just like Thompson’s writings.