I kept shaking my head in disbelief. I knew the separation of church and state at the federal level has been eroding, but I never knew to the extent that it was deliberately taking place.

Jeff Sharlet in The Family: The Secret Fundamentalism at the Heart of American Power (HarperCollins Publishers, 2008) is a riveting, scary, educational, thought-provoking must read for anyone who cares about the future of the United States. I’m serious. 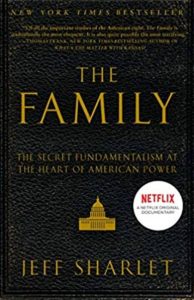 I realize this book came out 14 years ago, but it was only this summer that I learned about it from a friend. Wow, just, wow. It explains so much.

Sharlet takes readers on a journey to the beginning of this secret, not so secret group of powerful people in Washington—mostly older, white men—who essentially groom younger white men to follow their beliefs. It’s about influencing others in power—right up the president.

They don’t quote much from the bible. In fact, they have stripped down the bible to a tiny book that is just about Jesus.

The Family is the group behind the annual prayer breakfast, an event that has been attended by every president starting with Eisenhauer. Those gatherings are a who’s who of power.

After finishing the book I watched The Family, a five-episode Netflix series on the same topic. It brings the topic up-to-date until its release in 2019.

While the book talked about the global influence The Family has, the TV program brought this out more vividly. John Ensign, the former U.S. senator from Nevada, is prominent in the Netflix version of this story.

The book and series complement each other well, but are interesting alone. I recommend reading the book (it’s hard to get through, so take your time and set it down if you have to) and then watch the documentary.

It’s important we all know what is going on. What to do about it, well, I’m still mulling that over. Knowing who you are voting for is a start.