Book Review: ‘Season of the Witch’ delves into San Francisco’s dark side

Analyze any 15-year span and the stories are bound to be endless and interesting. Take the years 1967 to 1982 in San Francisco and your head may spin.

David Talbot weaves together the significant events from this time period in “Season of the Witch” (Free Press, 2012) in such a captivating manner it was hard to put the book down. 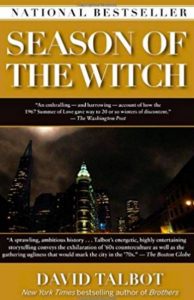 While I lived through some of what Talbot writes about, I had yet to graduate from high school. Plus, I grew up on the other side of the bay. Part of the book was a refresher, some of it went into details I never knew, and some of it was new. All of it was fascinating.

It includes the Summer of Love, Jonestown, Harvey Milk, Dan White, Janis Joplin, Bill Graham, 49ers, Dianne Feinstein, AIDS, drugs, Patty Hearst and so much more. Talbot weaves these characters and events together chronologically, explaining how one led to another or how they were related.

“Season of the Witch” is deftly written with a journalist’s eye toward getting to the truth, capturing nuances of the time, and revealing raw realities of life. This isn’t a feel good book. It delves into some of the darker, more sinister events and the people who were involved.

It is a cultural history book that should be a must-read for anyone who has ever called the San Francisco Bay Area home or is connected to it in some way.