Tennis is just a game like any other sport. Those who play it at the professional level are just people like other athletes. Sometimes all of that can be lost on the public.

Everyone has a story beyond their fame as well as what led to it. While so much has been written about Serena Williams, reading her own words made her story even more real. What made this book interesting is that it is 10 years old. 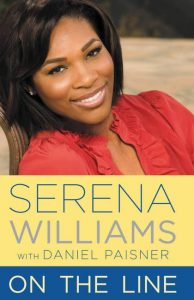 “On the Line” (Grand Central Publishing, 2009) is the story of this tennis star’s life up until the time it was published. So much happened in those year, so much has since then. She wrote the book it with Daniel Paisner.

This book goes more in depth than the headlines and highlight reels of Williams’ start in tennis, her childhood, her family, competition with sister Venus, and the turmoil at Indian Wells. It is Williams’ take on all of these issues and then some.

While Williams can be divisive, and certainly her parents’ – especially her father’s – approach to bringing her to the world stage has been scrutinized, there is no arguing she is a force to be reckoned with on and off the court.

The book is personal. It’s Williams’ perspective on her life, tennis and family. It gave more details about issues in her life than I had previously known and refreshed my memory about aspects of her life and the sport I had forgotten.

Anyone who is interested in Williams and/or tennis will find this book worth reading.