Book Review: ‘Source of All Things’ — a disturbing page-Turner

Tracy Ross delves just deep enough into the abuse inflicted by her father to leave nothing to the imagination. This book (published by Free 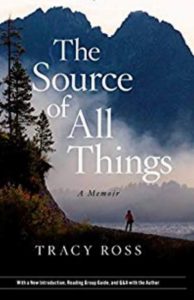 Press in 2011) is a memoir that peels back the reality of how in the 1980s when she finally told someone what was going on authorities didn’t know how to deal with this reality, is shows that families often side with the abuser, and that it’s a scar that will never fade away.

Besides taking the reader through her horrific ordeal, it is also a journey through some incredible natural landscapes the United States has to offer. This journalist is lyrical when appropriate, raw at times, but seemingly always honest. As an outdoor writer, she captures the beauty around her as few could.

While working for Backpacker magazine she wrote a shorter version in 2007. It won the National Magazine Award in 2009 – the highest award for a magazine writer.

Ross was in South Lake Tahoe, California, in February 2013 to read from her book. It took me six years to finally open it. It’s not a subject matter that I naturally gravitate to – sexual abuse. This book is so much more. While it was hard to read, it was also hard to put down.

Warning: Trying to access array offset on value of type null in /home/customer/www/kathrynreed.com/public_html/wp-content/plugins/custom-twitter-feeds/inc/CTF_Parse.php on line 67

Warning: Trying to access array offset on value of type null in /home/customer/www/kathrynreed.com/public_html/wp-content/plugins/custom-twitter-feeds/inc/CTF_Parse.php on line 67

Warning: Trying to access array offset on value of type null in /home/customer/www/kathrynreed.com/public_html/wp-content/plugins/custom-twitter-feeds/inc/CTF_Parse.php on line 31


Warning: Trying to access array offset on value of type null in /home/customer/www/kathrynreed.com/public_html/wp-content/plugins/custom-twitter-feeds/inc/CTF_Parse.php on line 58

Warning: Trying to access array offset on value of type null in /home/customer/www/kathrynreed.com/public_html/wp-content/plugins/custom-twitter-feeds/inc/CTF_Parse.php on line 27
@ ·
now

Warning: Trying to access array offset on value of type null in /home/customer/www/kathrynreed.com/public_html/wp-content/plugins/custom-twitter-feeds/inc/CTF_Parse.php on line 31