Book Review: Trevor Noah nails it with ‘Born a Crime’

It is hard to imagine anyone’s birth could be a crime. The reality is it’s another byproduct of racism.

Comedian Trevor Noah, who now is best known as the host of “The Daily Show,” was born to a white father and a black mother in South Africa during apartheid. While apartheid might be a footnote in history for some, it existed from 1948 to 1994. Just think, that’s only one generation that has grown up without these discriminatory practices. However, just because something ends legally, doesn’t mean it magically disappears. Ask anyone who has been marginalized and then has his or her “freedom.” 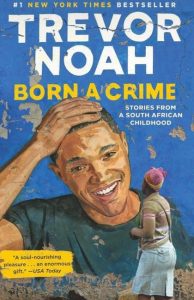 Noah’s book “Born a Crime: Stories from a South African Childhood” (Spiegel & Grau, 2016) looks at what his life was like in South Africa as a boy who didn’t belong because of his skin color. He certainly wasn’t the only child to face this dilemma.

This is how Noah describes apartheid, “Apartheid was a police state, a system of surveillance and laws designed to keep black people under total control. In America you had the forced removal of the native onto reservations coupled with slavery followed by segregation. Imagine all three of those things happening to the same group of people at the same time. That was apartheid.”

It’s not that white people were the only skin pigment who were racist. Anyone can be. The problem, though, as a child Noah had to be hidden at times.

“Where most children are proof of their parents’ love, I was the proof of their criminality. The only time I could be with my father was indoors. If we left the house, he’d have to walk across the street from us,” he wrote. There was always a threat of the government finding out about him being racially mixed. “The wrong color kid in the wrong color area, and the government could come in, strip your parents of custody, haul you off to an orphanage.”

Because Noah is a comedian he is able to add humor to a topic and life events that most would find absurd or even callous.

He holds nothing back in describing his mother, her beliefs, quirkiness and love for him. She was determined he would make something of himself. His choices, though, left that reality in jeopardy on multiple occasions.

This book is a glimpse into life in South Africa during apartheid and just after. It’s brutal, but honest. It’s humorous and poignant. It’s educational, but not preachy.

Hopefully, it makes people realize the stupidity in treating people differently (better or worse) because of skin color.