Becoming someone else. We’ve all probably thought about it, if just fleetingly.

But what would the consequences be? 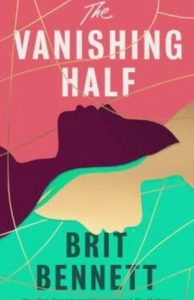 Stella and Desiree Vignes are twin sisters who grew up in a small town in Louisiana where the lighter skin you had the better. But no matter how light they were, the fact they were whatever percentage Black still made them Black in the eyes of the law and society. Well, that is until one passed.

The Vanishing Half (Penguin Random House, 2020) by Brit Bennett is the story of these sisters and the other people who are close to them. One decides to cross over—claiming to be white, while the other finds the darkest man she can to marry. The book spans the 1950s to the 1990s.

While this is a work of fiction, it’s easy to imagine people choosing the lives the sisters each picked. The other characters are also believable, which makes the story plausible. Still, something about it truly read like the fiction it is.

It took me twice to get into the audio book. Like any book, sometimes you have to be in the right mindset. So it was with this one. But once I got hooked I was glad I kept listening.