White people control just about everything in the United States—government, education, business, health care, you name it. The problem is we don’t want to let go of that control. We suppress others from having what we have, from being equal to us because we don’t want to share control or give up control entirely.

In her book White Fragility: Why it’s so Hard for White People to Talk About Racism Robin Diangelo (Beacon Press, 2018) clearly outlines how white people are the problem, not those of color. For more than 20 years Diangelo has been a consultant and trainer on issues of racial and social issues. This book is written by a white person for white people. 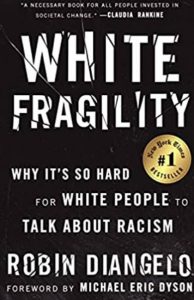 Too often white people reduce racism to two categories—those who are racist are bad, those who are not are good. No one wants to be bad, so they aren’t racist. Diangelo explains it isn’t that simple, and the good and bad thinking needs to be abandoned to make progress. Good people are racist and they do bad things. That’s a basic fact. It’s the ability to acknowledge your beliefs, your biases and your judgment that are important.

“Racism is deeply embedded in the fabric of our society. It is not limited to a single act or person. Nor does it move back and forth, one day benefiting whites and another day (or even era) benefiting people of color. The direction of power between white people and people of color is historic, traditional, and normalized in ideology,” Diangelo writes.

Racism is learned, and learned at an early age. Diangelo says preschoolers develop a sense of white superiority. On the reverse side, people of color understand oppression at an early age and recognize the need to defer to white people in order to get along.

What surprised me is the findings about millennials. Diangelo writes, “… millennials are committed to an ideal of color blindness that leaves them uncomfortable with, and confused about, race and opposed to measures to reduce racial inequality. Perhaps most significantly, 41 percent of white millennials believe that government pays too much attention to minorities, and 48 percent believe that discrimination against whites is as big a problem as discrimination against people of color.”

Diangelo doesn’t have a quick fix to cure white supremacy or white fragility. It’s going to take the rest of our lifetimes to work on it. Even she is a work in progress. What the book will show people is examples of white fragility, suggestions for how to deal with it, and the need to realize it is going to take effort to change, and you are going to be uncomfortable. No one ever said change was easy, but if your goal is to be a better you, this book will help. And even you don’t think you need help and are not racist and are as enlightened as you want to be, read this book. I’ll bet you get more out of it than you expected.