Life on planet Earth is not sustainable without uncontaminated drinking water. While this is not a new revelation, what some people might not realize is that the world’s fresh water supply is facing threats on multiple levels.

In her latest book “Superman’s Not Coming: Our National Water Crisis and What We the People Can Do About It” (Pantheon Books, 2020) Erin Brockovich takes the reader on a journey to various parts of the world, mostly in the United States, that are having or have had issues with potable drinking water. 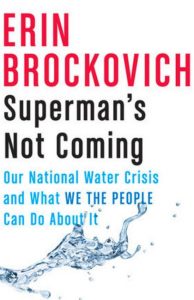 It was alarming to learn how much contamination exists at U.S. military bases, and that the Department of Defense is not doing all it can to help the men and women who still work there or providing the help to military personnel who have moved on, but still suffered consequences because of contaminants in the water.

One of the most egregious things going on is that water systems only test for known chemicals. The polluters of our waterways and aquifers—the source for drinking water—don’t tell the water providers what they are doing. It’s not until what comes out of the tap is discolored or smells funny, or people start dying or coming down with unexplained diseases, or animals are deformed or sick that the truth starts to come to light.

Even then so often government and industry get in the way of fixing the problem or even taking responsibility. Much of the book is about how grassroots efforts are needed to right the wrongs of the world. At the end of most chapters Brockovich gives tips on how people can get involved. Plus, she gives multiple examples about how so many “average” people were able to make a difference in their communities when it came to drinking water.

Brockovich more than once expressed how clean drinking water is not a partisan issue, pointing out how the Clean Water Act was signed by a Republican president and the Environmental Protection Agency was created by a different Republican president. But she has harsh words for the Trump administration with its stance toward coal as she explains how that industry is bad for the environment, and how this administration has decimated the EPA.

“We need more information about all the chemicals found in the marketplace today, and we need more scientists and experts to take a bolder stand,” Brockovich wrote. “Many contaminants found in our drinking water, including pharmaceutical and industrial chemicals, are not regulated.”

While the subject matter is incredibly serious, the book is not overly technical. Brockovich conveys her message in an easy to read manner. With plenty of real life examples, the book exposes how clean drinking water is something we all need to be paying attention to. She has solutions; it’s not just about pointing fingers and placing blame. However, Brockovich underlines that without our involvement, the government and industry won’t solve this problem. They need our prodding.

24 Hours of Reality: "Earthrise" by Amanda Gorman https://youtu.be/xwOvBv8RLmo via @YouTube

My yoga partners are stuck in down dog. #dogs #baj

Post-tennis libations with my niece V at new spot

Wish she’d spend more than 5 minutes on the big

Scenery is a little different biking in Baja. Love

Get out and play with these books. They make great