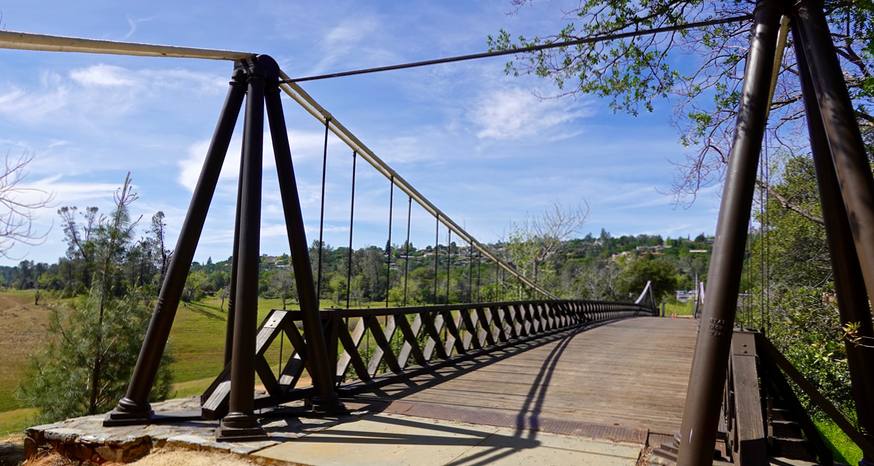 This Bidwell Bar Bridge from the 1800s is now only for pedestrians. (Image: Kathryn Reed)

Two bridges, the same name, and a whole lot of history.

When the first Bidwell Bar Bridge was installed across the Feather River in 1856 it was California’s first suspension bridge. The 372-foot-long steel span was built in New York for $34,922. It got shipped around the Cape Horn—the southern tip of South America—to San Francisco. From there it made its way north via the Sacramento and Feather rivers to Marysville. Then an oxen team took it to the location to be installed.

“Four heavy wire cables were used on the suspension bridge. Two main cables were strung on each side of the bridge, each containing 205 lengths of number 10 gauge wire,” a sign at the bridge states. “The total weight capacity the bridge could carry at one time was approximately 40 tons.” 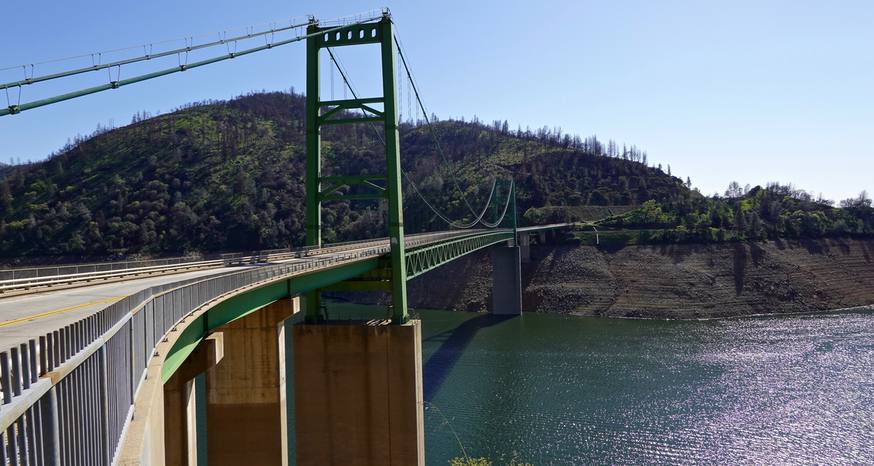 In 1856, this weight would be equal to nearly 62 empty covered wagons. This compares to a typical 18-wheeler loaded truck that weighs 40 tons. In other words, it wouldn’t hold up to today’s traffic.

Modern travel, though, isn’t what doomed this bridge or the adjacent tollhouse. Both operated until 1954. The tollhouse was also a post office, store and residence for the bridge tender.

What rendered them no longer usable was the construction of Oroville Dam, which started in 1961. It dammed the Feather River and created Lake Oroville. The initial location is under water.

The original bridge and tollhouse were relocated in 1977 to State Parks land to what is now called Bidwell Canyon, a sector of the greater Lake Oroville State Recreation Area. Today the bridge is open to foot traffic. The bridge is a National Historic Civil Engineering Landmark and a California Historical Landmark. 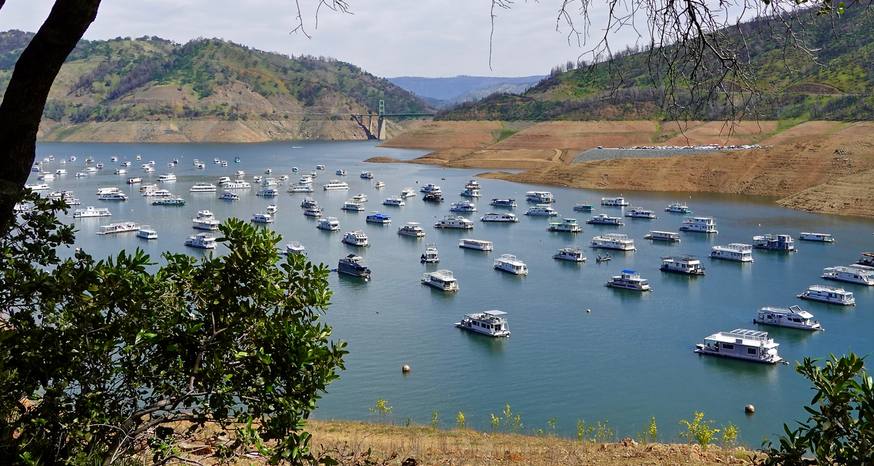 Today’s Bidwell Bar Bridge can be seen in the distance from the area of the old bridge. (Image: Kathryn Reed)

A short walking trail brings one to an area where the second Bidwell Bar Bridge can be seen.

It is 1½ miles upstream from where the original one was built. It was built 600 feet higher up on the hillside to accommodate the reservoir. It is now part of Highway 162, also known as Oroville-Quincy Highway.

This new suspension bridge was built in 1965. At 627 feet above the original stream bed it was one of the highest such bridges at the time. When the lake is full it’s like you can touch the water from the bridge.