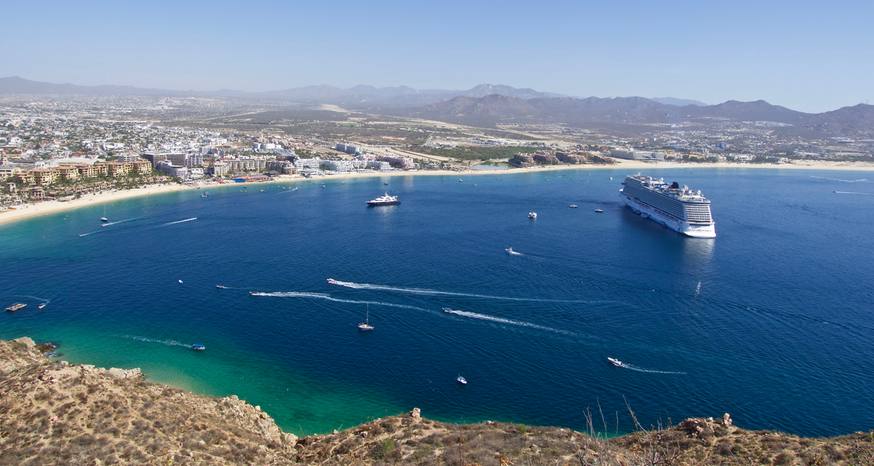 It seems like most days there is a huge cruise ship anchored in the bay at Cabo San Lucas, Mexico. While there are days without a ship, they are becoming fewer.

Some of the ships having Cabo as a port of call include Royal Princess, Carnival Miracle, Seabourn Soujourn, MS Eurodam, Disney Wonder and Norwegian Bliss.

The ships are big money for this sector of Baja California Sur.

Business Research & Economic Advisors conducted surveys of passengers and crew to ascertain the data for various cruise locations. While Cabo is growing in popularity with the cruising public, the Caribbean remains the No. 1 destination in the world.

Those opting for a ship with a stop in Cabo are mostly from the United States, United Kingdom and Canada; with the average age being 59, and more than half being older than 65. Average income is $104,500. This is all data from Business Research & Economic Advisors for the 2014-15 season.

Passengers in Cabo must take a tender to shore. There is no cruise terminal at the dock, as is common in other locales. Passengers come out at the marina where they are confronted by an array of entrepreneurs hawking their wares or offering excursions.

Ninety percent of the passengers and 33 percent of crewmembers in 2014-15 got off the ship in Cabo to visit the area. The study found that they spent $22.4 million on “cruise tourism expenditures.” Most of the money was spent on shore excursions, food and beverages, watches and jewelry, and clothing. Most of the excursions are in the Los Cabos area, but some ships offer bus trips to Todos Santos for the day. While there are organized outings by the ships like scuba diving, plenty of people put together their own excursions.