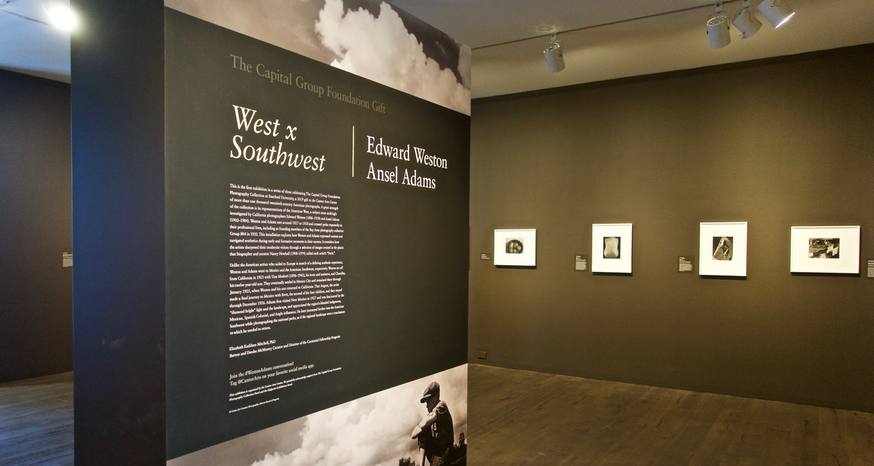 The photography of Ansel Adams and Edward Weston are on display at Stanford University until Jan. 6, 2020. (Image: Kathryn Reed)

Similar, yet different. This is one way to describe the photography of Ansel Adams and Edward Weston.

Each captures the landscape surrounding them in a way that draws the eye to examine every detail. The play of light, lines and natural beauty beckon one to admire what their lenses captured. As with all great photography, it goes beyond the equipment. It’s having an eye for the subject and the patience to capture the moment.

A sampling of their works is on display in the exhibit “West X Southwest” at the Cantor Center on the campus of Stanford University.

“This installation explores how Weston and Adams expressed content and navigated aesthetics during early and formative moments in their careers. It considers how the artists sharpened their modernists visions through a selection of images created in the place that biographer and curator Nancy Newhall (1908-1947) called each artist’s ‘Paris’,” Elizabeth Kathleen Mitchell, curator and director of the Curatorial Fellowship Program, wrote of this exhibit.

Adams is known for his work in Yosemite and the Southwest, while Weston explored Mexico.

Together, in 1934 they were founding members of Group f/64, a San Francisco Bay Area photography collective. They had met in the mid-1920s; then crossed paths at various times. It was Weston who introduced Adams to Death Valley, while it was Adams who showed Weston Yosemite and other parts of the Sierra.

Adams said, “(We) had both come to be sympathetic to each other’s work, though we were never on an identical wave length.”

This sentiment is obvious as one walks through the exhibit. What I learned is that in 1941 Adams was commissioned by the U.S. Department of Interior to photograph national parks, mostly in the Southwest.

Having been an admirer of Adam’s for years, it was his photographs that captured my attention the most. This exhibit includes his iconic “Moonrise” at Hernandez, New Mexico. Before reading the description for “Dune” I thought the photo was a winter scene of plants struggling to survive in the snow. Instead it is an image of White Sands National Monument in New Mexico.

With the latest trend being printing on canvas, seeing an exhibit like this makes me wonder what the future of photography will bring. To me, this is real photography and a better representation of an artist’s craft.