Industry experts trying to figure out the future of travel

Today, snow quality doesn’t even register as a concern for mountain destinations. This is a dramatic change considering it has been at the top of the list for decades. A pandemic has altered priorities for travelers as well as the destinations they want to visit.

Mountain Travel Symposium on May 13 hosted a webinar titled Mountain Tourism in the Age of COVID-19: What the Data Tells Us. At the start participants were asked: As a business, what is your biggest concern? The answers:

Over the course of a couple weeks starting in mid-March travel came to a screeching halt throughout the world. Luxury and upper scale hotels in the United States hit single-digit occupancy. It is the 18- to 34-year-old sector that was slowest to cancel trips, according to data provided during the webinar.

“You could get younger millennials with deals. That’s why target messaging is important,” said Pete Comeau with Phocuswright. Pre-COVID-19 deals were the way to stimulate travel for all consumers. Not so anymore. In this new world most people want to feel safe; and that’s assuming they want to travel or have the money to do so. 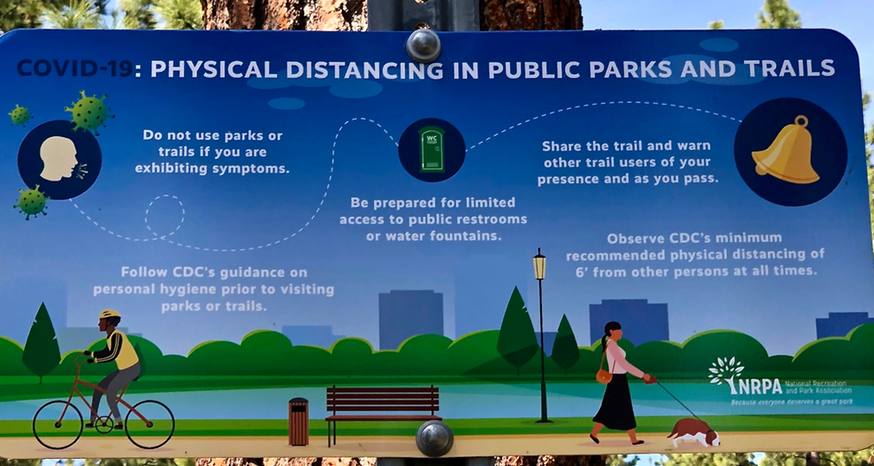 A sign in Bijou Community Park in South Lake Tahoe is likely to remain for several months. (Image: Susan Wood)

Occupancy is incrementally increasing across all hotel categories, but has a long way to go to recover. Fifteen percent of hotels are completely closed, including most throughout the Lake Tahoe-Truckee region. Experts don’t expect 2021 numbers to reach 2019 stats. Ali Hoyt with STR said 1 million room nights are still being sold each night. Occupants include first responders, homeless, airline personnel, other business travelers, and a few on the road for fun. (STR provides premium data benchmarking, analytics and marketplace insights for global hospitality sectors.)

Hoyt said this time of closure or minimal occupancy is an opportunity for properties to rethink how they want to serve customers, and their business operations as a whole.

More encouraging for destinations is that people are tending to postpone trips as opposed to outright cancellations. Tom Foley with Inntopia said, “In the last two weeks it is nudging into the positive to more bookings than cancellations. We are on a knife-edge right now.”

As the arrival date gets closer, people are canceling. People who were planning to travel in May, June and July have rebooked for June, July and August. Many who were once planning a summer trip have rescheduled for the fall. Foley said new bookings are coming for July, with the second most popular time frame being September through December.

From a May 3 survey by Destination Analysts it looked at what months people in the U.S. have plans to take a leisure trip:

Flexibility isn’t something the hospitality industry has always been known for. Foley said 10 weeks ago concessions were made in about 33 percent of cases, whereas today it is 100 percent. He said 90 percent of properties are offering full refunds.

Dave Belin with RRC Associates said, “It now feels like resorts, hotels and airlines are taking on more of the risks.” It was noted how ski resorts are offering guarantees on 2020-21 season passes; something that has never been offered before.

Increased consumer confidence is what will move the needle for travel. It’s not there today. Boston Consulting Group took a survey April 24-27 about consumer sentiment. The question—Would you be concerned about doing any of the following in the near future?:

Marketing is going to be a huge component going forward. The panel suggested messages be customer centric, realizing everyone is struggling. Consumers should expect to see ads less focused on what a destination has to offer and more with a moral compass as a barometer, including health and safety being selling factors, and empathy being part of the message.

The participants were later asked: As a business, what is your biggest opportunity? The results:

There was mixed sentiment as to whether experts believe consumers will want to stay at traditional hotels or a private home in the future. Already larger hotel brands like Hilton and Marriott are touting how they have certain cleaning protocols in place. On the flip side, travelers might want the intimacy of a home knowing they won’t run into masses of people. Cleaning, though, could be a concern for some.

“Safety and security will be really big and will be until we see a vaccine,” Comeau said. “Property managers will be challenged.”

With one-fifth of the U.S. population out of work, discretionary income is lacking. Travel is one of the first things to get cut. That reality is something destinations are going to have to contend with. It could be a while before people have the money to travel even if they feel safe to do so.

Another thing that was brought up in the webinar is that people are going to want the destination to be fully open. This means restaurants to eat at, stores to shop in, and entertainment venues operating. Cities and counties, though, are likely to open in stages as is being seen now. Capacity at restaurants, hotels, on boats and other tourist destinations are going to be lower going forward based on regulations, let alone on who actually shows up. There won’t be jobs for everyone who lost them. These are economic realities for everyone.