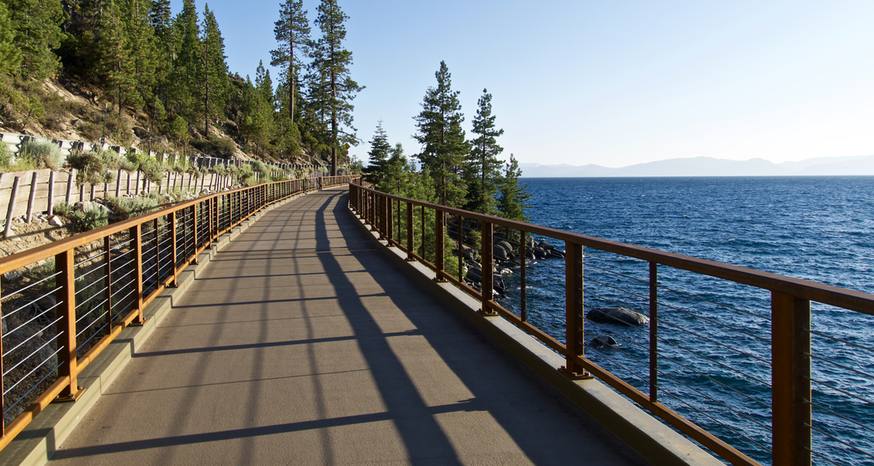 Breathtaking. That is one of many superlatives to describe the East Shore multi-use path that opened earlier this summer. The nearly 3-mile paved route goes from Tunnel Creek to Sand Harbor in Incline Village.

A few years ago, for a story I did for Lake Tahoe News, I had the opportunity to walk along part of what was the planned route. Even then I knew this was going to be something special. It’s so much more spectacular than anything I could have imagined.

“It is a trail that takes you someplace, but the journey is the destination,” Amy Berry, head of the Tahoe Fund, said during that excursion in 2014. 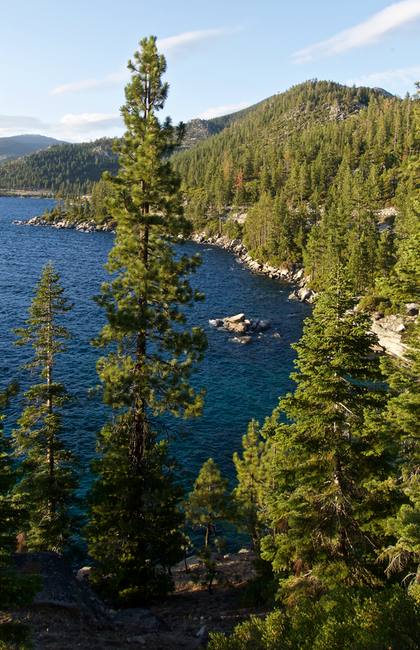 It takes a while to walk the trail because there are so many vistas to photograph. (Image: Kathryn Reed)

Estimates during the planning stage were that 100,000 people would use this trail each year.

The East Shore of Lake Tahoe has some of the most dramatic scenery in the basin. This trail allows almost anyone to enjoy this slice of Tahoe that until now may have been off-limits to certain people. Before it meant seeing these views from a vehicle whizzing by on Highway 28, being on a mountain bike along the Flume Trail, dealing with the masses at Sand Harbor beach, or risking your life parking and darting across the highway to get to the water.

The pavement is 10-feet wide and built to ADA standards. There are a couple curvy and steep sections that had skateboarders using their foot as a brake, and some cyclists panting. Walking didn’t seem like any big deal. 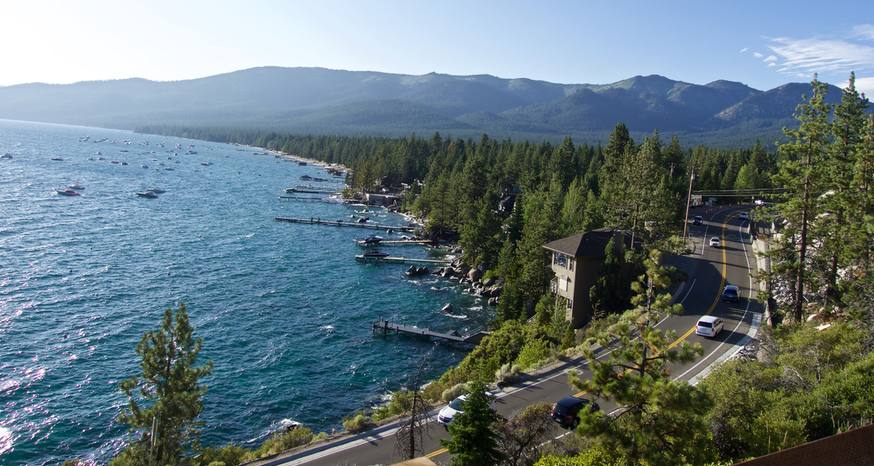 Looking north with Highway 28 in the foreground. (Image: Kathryn Reed)

Planners were able to keep 11 offshoots to the lake. This is the only place bikes are not allowed. With the lake being so high this summer, not all of those locations offer much sand to sprawl out on. Still, it’s nice to know these spots are there for those with dogs who would want to have a drink.

Major troublesome spots for dogs are the six steel-fiberglass bridges. The longest is 810 feet. This also happens to be the longest bridge in the basin. An Ohio company made the bridges. After dogs had their pads damaged from the hot surface, signs were posted warning people about the bridge temperature. At the long span and another bridge are wagons people may use to transport their canine. The Tahoe Transportation District, which oversaw the project, would not say if anything is going to be done to lessen the danger on the bridges. 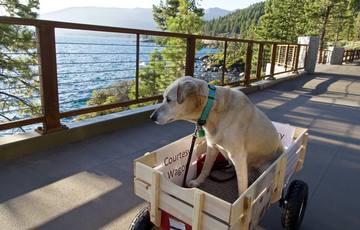 Some of the bridges are so hot that local residents have left wagons to transport dogs. (Image: Kathryn Reed)

A good rule of thumb is if you wouldn’t go barefoot – on any surface – because of the heat, a four-legged family member shouldn’t be either. This includes asphalt and sand. At sunset the temperature wasn’t an issue.

TTD manager Carl Hasty would not say if the heat of the bridge should be a concern to cyclists’ rubber tires. 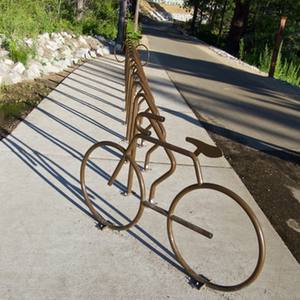 A nice attribute to the route is the abundance of bike racks, as well as the couple stations to do minor repairs, including adding air to bike tires.

The total endeavor came with a hefty price tag – $40.5 million. This was a mixture of private and local-state-federal government dollars. About half went to the trail, underpass and parking, while the other half was for environmental and highway upgrades. Considering construction was right next to the lake, this meant more environmental concerns; then there is a tunnel where the path goes under Highway 28 taking people from the mountain side to the lake side; plus, there are a multitude of granite vista areas – ideal for sitting to take in the views. Parking spaces were also added. Eliminated is all the highway parking between the two points of the trail, with this being done mostly as a safety concern. 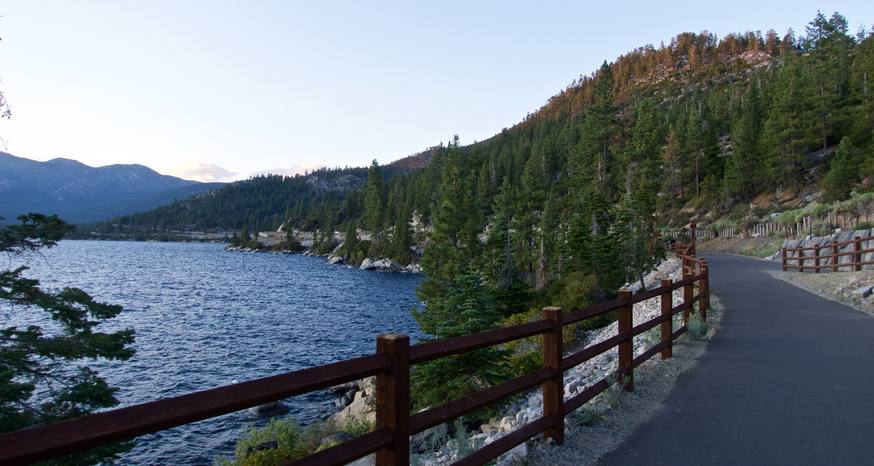 More than half of the trail is along Lake Tahoe. (Image: Kathryn Reed)

Eventually it will cost to park at some locations. Tahoe Transportation District officials would not say what the fee will be or when it will be implemented. The payment portals are already in place.

For those who want to enter Sand Harbor State Park it costs $2 on foot (dogs are not allowed), while it is $10 to drive in.

While the bi-state Tahoe Transportation District was the lead agency to make the path a reality, it will be the Nevada Division of State Parks which maintains it. It took three years to build it. 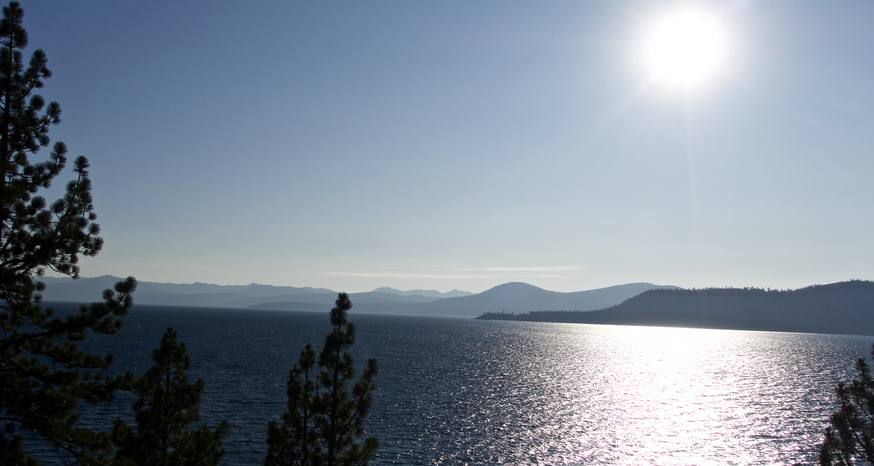 Views along the trail are mesmerizing. (Image: Kathryn Reed)

This is the second section of the greater 33-mile Stateline-to-Stateline trail. One day it will cover the entire Nevada side of the lake, thus the reference to the state lines. The end/starting points will be Stateline and Crystal Bay. The first section was completed it 2013 with 2.2 miles that go from Rabe Meadow in Stateline to Round Hill Pines Beach. 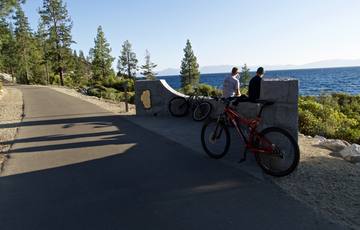 Cyclists enjoy the scenery at one of the many granite rest stops. (Image: Kathryn Reed)

The third phase is already being planned, with the comment period on the U.S. Forest Service’s draft environmental assessment document having ended Aug. 11. The documents are available online. This next section will be eight miles from Sand Harbor to Spooner Summit.

As with all the sections, it’s not just a multi-use path that is being laid down. A major goal is to eliminate parking on the narrow Highway 28 and to create parking areas that are safer. Improvements to utilities, a focus on erosion, and reducing sediment from reaching Lake Tahoe are all goals of the project.