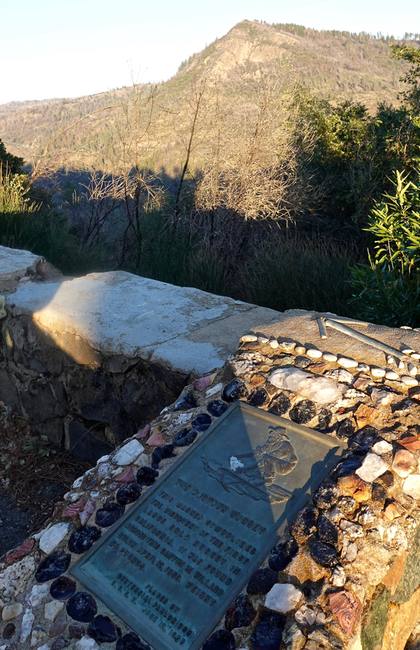 A plaque in Magalia points toward Sawmill Peak near where a 54-pound gold nugget was discovered. (Image: Kathryn Reed)

Butte County once boasted being home to the largest gold nugget in the world.

On April 12, 1859, Ira Weatherbee discovered the 54-pound specimen in the Feather River Canyon near the town of Magalia. At the time this tiny enclave north of Paradise was known as Dogtown. That is why the chunk of gold is referred to as the Dogtown Nugget.

The plaque along the old Skyway, which was erected in 1955, says: “This marker symbolizes the discovery of the first large gold nugget in California. It was found across this canyon in Willard Gulch April 12, 1859. Weight 54 pounds.”

The gold piece was found at a hydraulic mine. Even though it was melted down, casts of the nugget were made. One used to be on display at the Gold Nugget Museum in Paradise until it burned down in the 2018 Camp Fire.

Weatherbee took the more than $10,000 he got for the nugget and built the Chico Hotel, which opened Jan. 1, 1861. The downtown lodging establishment twice burned to the ground, and was not rebuilt after the second fire.

Eventually that record-setting gold nugget was eclipsed by one discovered in August 1869 in Sierra Buttes. It is the largest ever unearthed in California; weighing in at 106 pounds, according to the Sierra County Historical Society.