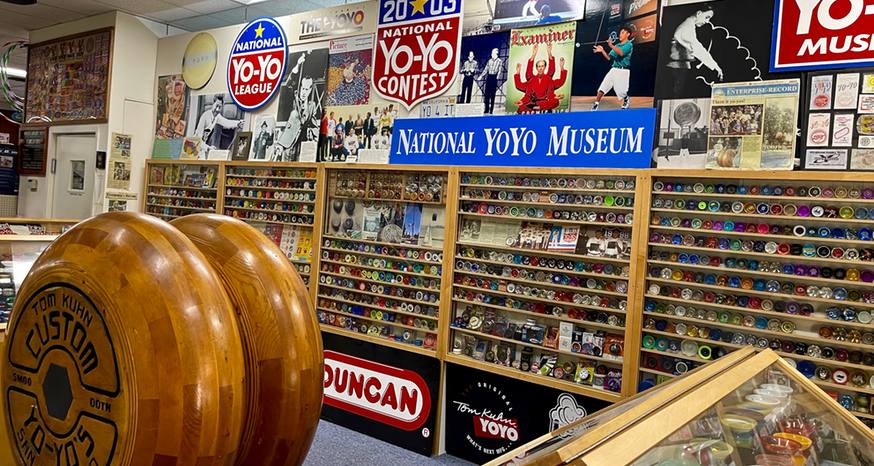 The National Yo-Yo Museum in Chico has hundreds of the spinning toys. (Image: Kathryn Reed)

It’s amazing how a round object with a string tied to it can bring endless hours of entertainment to people of all ages.

This is the yo-yo. While it’s not as ubiquitous as it was in my childhood, people are still playing with this toy, even competing with it.

The National Yo-Yo Museum in downtown Chico pays homage to this instrument of fun. Row upon row of yo-yos line the walls. In the middle of the display is the world’s largest working wooden yo-yo, weighing in at 256 pounds.

It is a version of the No-Jive 3-in-1 yo-yo created by Tom Kuhn.

According to the museum’s website, “At 256 pounds, Big-Yo made it into the 1982 Guinness Book of World Records claiming the title of World’s Biggest Working Wooden Yo-Yo. And yes, it does really work. You’ve heard of Paul Bunyan right? Actually, with the assistance of a large crane and a skilled operator, Big-Yo can successfully make its way up and down the string.” 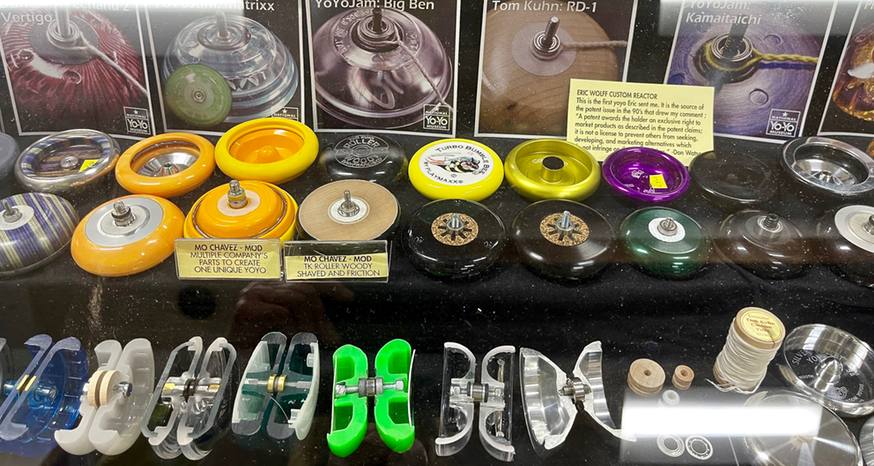 This heavy weight is 50 inches high, 31.5 inches wide, and has an axel diameter of 5.5 inches. The body is made out of California sugar pine and the face is Baltic birch. The axel sleeve is hardrock maple, steel axel rod and hex nuts. It was built by Haas Wood & Ivory Works of San Francisco.

Kuhn, a dentist by trade, wanted to improve upon the yo-yo design. His website shows a multitude of designs made from various materials. Some sell for more than $100, while others are less than $10.

The origin of the yo-yo dates to 400 BC. Historians aren’t sure if it was invented in China, the Philippines or Greece.

According to the museum, “Duncan convinced Hearst that the yo-yo could increase circulation. Hearst newspapers across the country would advertise Duncan yo-yo contests and list the prizes. The catch was kids had to sell three newspaper subscriptions to enter. The rest is history—the yo-yo craze of the 1930s had begun.”

A chart on one wall lists the 10 basic yo-yo tricks, including the spinner, the forward pass, over the falls, walking the dog and rocking the baby.

The museum is tucked in the back corner of the store Bird in Hand on Broadway Street. For those looking for fellow yo-yo fans and lessons, the Chico Yo-Yo Club meets at the museum on Saturdays from noon-2pm.

Pre-pandemic yo-yo competitions in Chico were the norm. Trophies, photos and newspaper clippings are part of the museum display.

The museum website says, “Every year the National Yo-Yo Museum hosts the U.S. National Championships, and manages regional competitions through the National Yo-Yo League. Yo-yo contests are now held with great frequency, and it is clear that this ancient toy has remained popular with people around the world.”

When the actual competitions will return has not be disclosed.