Punta Chivato — a remote enclave of expats in Baja 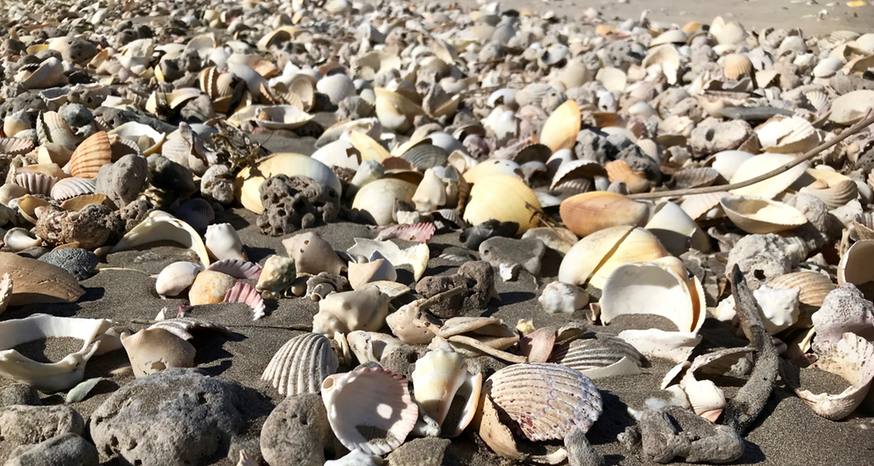 Shells line the beach at Punta Chivato for as far as the eye can see. (Image: Kathryn Reed)

Isolated, tranquil, welcoming and devoid of native Mexicans is what Punta Chivato is all about.

Located on the Sea of Cortez in Baja California Sur, Mulegé is to the south and Santa Rosalía to the north. It’s about eight hours from Todos Santos. For the expats who call Punta Chivato home it’s paradise.

Normally the water is calm enough to kayak, with fishing another popular pastime. Garages are built tall to fit people’s boats.

Commercial fishing is not allowed in the bay there, known as Bahía Santa Inés. In high seas the week before Christmas three commercial shrimp boats were in the bay. Even though a Mexican navy vessel anchored nearby, it did not give chase to the boats when they headed out toward Punta Concepción. Had the boats gone north, they would have been near San Marcos Island, where gypsum is mined. 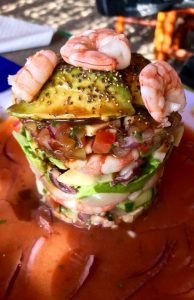 A tower of seafood at Palapa la Abuela, a restaurant on the south side of Santa Rosalía. (Image: Kathryn Reed)

The lights of Punta Concepción are visible at night from Punta Chivato. It’s located at the tip of Bahía Concepción. Mostly, though, the sky is so incredibly dark in this part of Baja that the stars are the main attraction. Looking up is a reminder of how we are a tiny speck in this galaxy.

In the daylight it is seashells that will capture one’s attention. Scattered as far as the eye could see are shells of various sizes and colors.

Moon’s “Baja” guidebook says, “Punta Chivato has built up as an American housing community over the past few decades with residences ranging from modest structures to million-dollar beach mansions.”

This isn’t the only place in Baja (or the world) where people from the United States have made their own community. Turning off Highway 1 travelers first drive through Palo Verde. It’s clearly a poor Mexican village with not much in the way of amenities. A school and tiny market are visible. 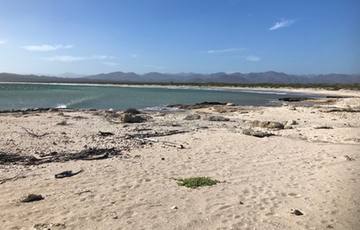 Plenty of sand exists on the beach at Punta Chivato; it’s not all shells. (Image: Kathryn Reed)

The expat community of Punta Chivato is 16 kilometers (about 10 miles) from Palo Verde down a dirt road. The two, like so many areas, are linked by the gringos hiring the locals to do various jobs, and the gringos giving back in charitable ways.

Roughly a couple hundred people call Punta Chivato home, though a fraction live there year round. Together they’ve built a community center, which hosts events and acts as a gathering spot for the expats. A kitchen allows for food to be made there. A housing area within the town has a pool for residents, which can be a nice change from the salt water.

Making it easy to get to Punta Chivato is the private dirt runway; assuming one has a private plane or friends who fly. This can be more convenient than driving the peninsula or flying into Loreto, the closest commercial airport.