Screaming. It’s what riding a roller coaster is all about. That exhilaration when it drops suddenly as though it’s in a free fall, or turns upside down again and again making it impossible to know where the sky or ground should be.

I don’t know when I rode my first roller coaster, but the last time is fresh in my memory. It was last month for my birthday. It had been years, probably decades, since I was last at California Great America in Santa Clara. It used to be a place I would visit most every year when growing up in the East Bay. (It opened in 1976.) Darla and I would run from ride to ride. We stopped to play the games of chance. One year we each won a huge stuffed animal. Not sure whose parents were driving that day, but we managed to fit our winnings into the vehicle. 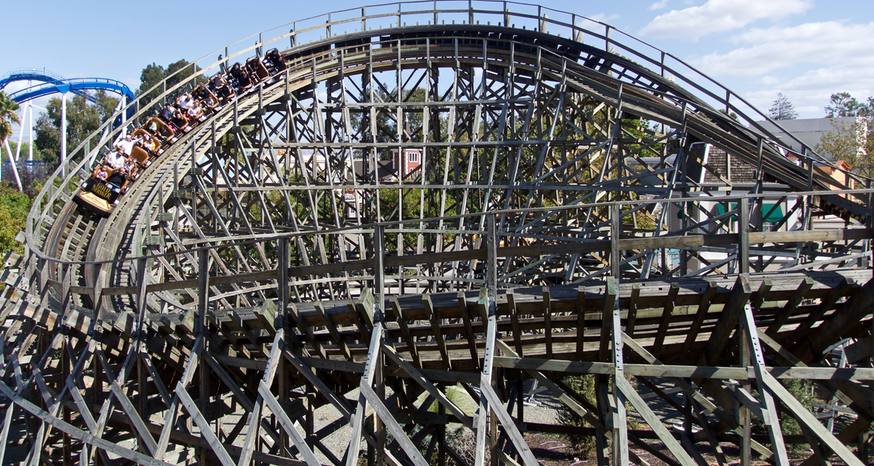 In September, I was there with Sue, a self-proclaimed non-lover of roller coasters. Still, she was a trouper. Had it been up to her, we would have stuck to the water rides and the 4D holographic journey. Both were fun, but they aren’t adrenaline pumping, oh my gawd that was so outrageous let’s do it again rides. Rip Roaring Rapids was a must-do on Sue’s list. Oh, my, the before and after pictures are telling. Dry in the first, soaked in the second. The other two people in this oversized inner tube of sorts were also wet as we disembarked.

Don’t be fooled by Gold Striker. Even though it’s wooden, it’s modern. It opened in 2013 and to this day remains the tallest and fastest wooden roller coaster in Northern California. Every year it has been named one of the world’s Top 10 roller coasters by Amusement Today’s Golden Ticket Awards. If you like the Giant Dipper at Santa Cruz, you will definitely want to ride Gold Striker. It goes 53.7 mph, with a height of 108.2 feet. 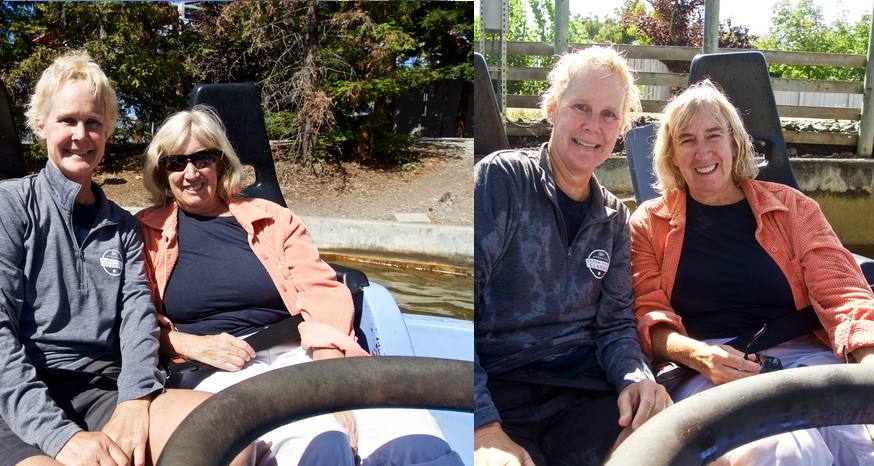 Kae and Sue on Rip Roaring Rapids — the before (dry) and after (wet).

While Sue indulged me on this birthday outing, the photos of us on the rides clearly showed who was having more fun and who was more scared. I was all smiles; she never had her eyes open.

It’s hard to decide which coaster was my favorite. All are different in their twists and turns, whether it’s more or less jarring, if feet are suspended or inside the cage.

The first ride of the day I did alone – Flight Deck. It debuted in 1993 with the name Top Gun. This is how the park describes it, “Riders soar through a 360-degree vertical loop, two 270-degree after burn turns, a full-circle wingover and a zero gravity roll. If that’s not enough, you take this 50-mile-per-hour flight in a floorless coach, suspended below the coaster’s steel track.” It was awesome.

The smoothest coaster we went on was Rail Blazer. Instead of sitting next to your scared friend, there are individual seats lined up in cars of eight. The track looks so narrow. This is because the cars are straddling it. It opened in 2018 and is the newest coaster at the park. 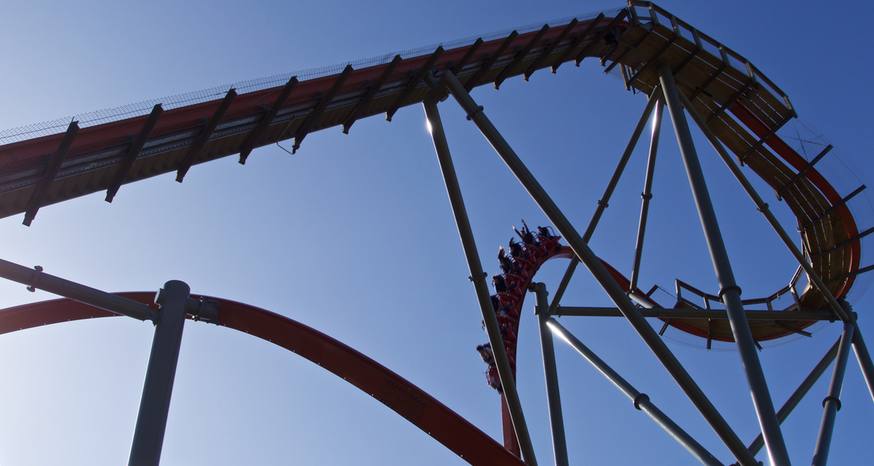 The Santa Clara City Council in 2017 approved a new master plan for the park. This means more rides are coming, some will be replaced, and hours of operation will expand.

Going on a Saturday in September was ideal – it wasn’t crowded, the wait time was reasonable – for rides and food. Now through Nov. 2 the park has special haunted nights in celebration of Halloween. Be sure to visit the website, as the park is not open year-round, and pricing is better online.