Tourism officials in overdrive to get people back to Tahoe

Road trips. That is what most tourism bureaus are banking on to salvage the summer season. Tahoe is no different.

“Travel will be more regional. The drive market will be expanded,” Carol Chaplin, CEO of the Lake Tahoe Visitors Authority, said June 19. Tourism on the South Shore was the focus of that day’s webinar hosted by Lake Tahoe South Shore Chamber of Commerce.

Advertising dollars are being redirected from those who would fly here to those within 600 miles from Tahoe or about a 10-hour drive away. The thinking is Tahoe will be a stop on many people’s road trip itineraries. The other focus for ads will be on Southern California and Las Vegas. With LTVA’s website traffic “skyrocketing” from Las Vegas, officials are confident in having that area be a target. Starting July 13 there will be a regional ad campaign in Los Angeles that will layer on top of the LTVA campaign. This will be all digital for six weeks.

Although the Reno-Tahoe International Airport lost about 95 percent of its passenger load since the world shutdown in mid-March, the numbers are starting to come back. Chaplin, who is wrapping up her year as president of the Airport Authority, said one day there were only 270 passengers. Normally, there are thousands. 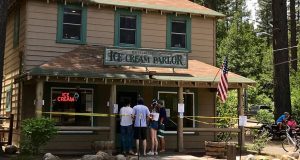 LTVA has partnered with the Tahoe Fund to purchase two digital billboards; one on the West Slope and the other on Spooner Summit, talking about safe distancing and wearing masks.

When COVID-19 hit LTVA canceled all paid media, then changed the message to shelter in place and Tahoe will be here when it’s appropriate. Then came the rebound phase. This week begins the launch phase, meaning the agency wants as many people here as possible. Being responsible is part of the message. The messaging to potential visitors will be to adventure lovers, those wanting to relax and recharge, and to those with and without kids. Realizing there is plenty of space to recreate in the outdoors is a draw for people living in more confined locations like cities. Still, there is only so much sand to sprawl out on at the beaches. Social distancing has not been taking place on Tahoe beaches.

This past weekend the Camp Richardson area looked like a typical summer weekend with traffic congested, people milling about, and a line out the ice cream store. Even so, the California tourism bureau expects tourism spending to be about $72 billion for 2020, half of what it was in 2019. Half the jobs in tourism (613,000) could be lost. No local jobs numbers or revenue figures were provided during last week’s talk.

I know my family won’t be contributing to the local economy like we expected to. This week I was supposed to be hosting about 40 people from all over the country. We have delayed the gathering for one year. I have to say the folks running the MS Dixie in Zephyr Cove were super easy to deal with. I wish I could say the same for Lakeland Village in South Lake Tahoe. I still haven’t received my deposit—which is more than $1,200. (I’m not rebooking until I get this money back.) While we are going to stay there in 2021, it was anything but easy to get all the condos canceled, then secure the same pricing level as this year for next. The fact that Vail Resorts, which now manages the condos, made me deal with the former management company and some third party I had never heard of was absurd. Fingers are crossed things go more smoothly in a year and that I actually get this year’s deposit refunded.

Oddly, on June 17, Aramark, which runs the MS Dixie paddle-wheeler, sent out a press release about its Fourth of July fireworks cruises. When asked how such a thing could be possible when there won’t be any fireworks this year, the company sent a response saying, “This has now been canceled.” But they didn’t send a press release to all media saying as much, just to this writer who inquired about it.

While the American Century Championship celebrity golf tournament is still being played July 8-12, there won’t be any spectators. The 80 or so celebs will be featured in about 18 hours of live TV between NBC and the Golf Channel. Chaplin said at Hole 17—the party hole where all the boats are—will be different this year. People won’t be allowed to get off their boats. This event has always been a boon for area nonprofits. About $600,000 has been committed this year to charities, with locals to receive about $200,000. It’s not known if there will be parameters like health care and racial equality being where the money is spent.