Adjusting to mangoes in Baja being affordable and in U.S. a bit pricey

The sweetness of that soft, almost velvety flesh is something to wait for each season. For those in the United States, it can be a bit expensive. For those where mangoes are grown, they can be as routine and abundant as backyard tomato and zucchini plants.

Such are the hazards of the world. Often it’s an overabundance of some crop in one location and a dearth in another. Thank goodness for the import/export markets.

While mangoes can be found this time of year in stores in the United States, many are littering the ground in Todos Santos. One social media post from this enclave in Mexico was looking for people to give the fruit to. It’s that prolific. Trees can be so full of these orbs that people sometimes leave what have fallen to the neighborhood critters. 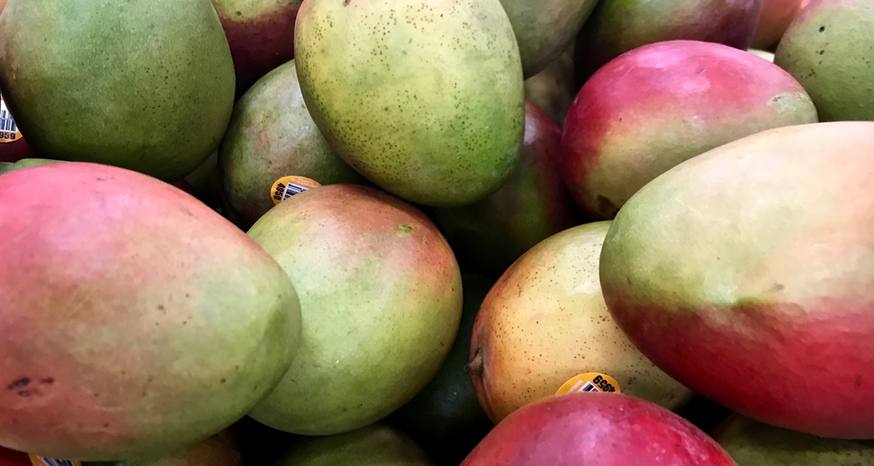 It can be hard on the wallet buying mangoes in the United States. (Image: Kathryn Reed)

Todos Santos in 2007 started celebrating the mango with an annual festival in late July. COVID-19 is canceling so much fun throughout the world. The main season for the fruit in Mexico is July-September.

Mangoes are a such a versatile fruit in addition to being super healthy. Peeling them and then eating them straight is a great start. Making them part of a fruit salad is a good option. I’ve had them with yogurt, frozen them for smoothies, and made frothy margaritas. My friend, Jill, in Baja shared some of her jam with me. I used it on ice cream, too. Street vendors often have slices for sale.

Most countries that grow mangoes are in tropical areas, which makes Todos Santos a natural location. Based on where they are grown it makes since Asians eat the most mangoes at 29 percent, then Hispanics at 28 percent, Blacks at 16 percent, whites at 12 percent, other is 7 percent. The first documented cultivation of mangoes was in India about 2000 BC.

In metric tons the top mango producing areas are:

While Mexico doesn’t grow as many mangoes as some countries, it is exporting the most, according to mexicanmangoes.com. About 21 percent of the product is shipped out of the country. Dehydrated mangoes are growing in popularity, too.

Antioxidants in mangoes are a good deterrent against breast cancer, leukemia, prostate, and colon cancer. Eat an entire mango to get 25 percent of the daily vitamin A and beta-carotene requirements. They help lower cholesterol and manage insulin levels because of the low glycemic index.

People in the United States are beginning to consume more mangoes. In 2000, the average person ingested 1.75 pounds of fresh mangoes, while in 2018 that ballooned to 3.17 pounds. It represents a fraction of the more than 115 pounds of fruit consumed per person in the U.S. per year. People in the Western states are eating the most mangoes.

Throughout the world there are more than 500 mango varieties.The more popular ones in Baja California Sur are Kent, Ataulfo (aka Manila), Manzano, Criollo, Machete, Papayo and Tempranero de Mayo.