In business for more than 100 years, it took a pandemic for Fanno’s Cutlery to have its best year.

With restaurants closed or not able to have customers dine in, people were at home cooking more than usual. This is when they realized their knives were dull, as were their landscaping tools. After all, gardening became a pandemic pastime as well.

Fanno’s is who people took their blunt blades to.

“Saw business was good the last two years. The pandemic forced people to stay home so they did landscaping,” owner Robb Fanno said. “The tree saw was our core business. Some of our dealers were up 300 percent.”

It was Fanno’s grandfather, Asa, who started the Chico company and revolutionized the agriculture saw business. He had an almond orchard, which until his invention of the pole saw, required climbing into the tree with a saw to prune it. This was dangerous work.

The Fanno curved pole saw was the first of its kind. The tooth design and the blade’s curved edge are what made it unique. The apparatus allowed for a safe way to prune those hard to reach branches. The operator could do the work standing on the ground—not in the tree or on a ladder.

From there a folding saw was developed, as were countless other saws. It’s assumed by those who know a thing or two about these tools what someone means when they say they own a Fanno without ever mentioning the word saw.

Being inventors also meant developing the machinery to make the end product.

“A lot of the equipment in the 1960s and 1970s we made ourselves because nothing was out there,” Fanno said. “If it stopped working, we upgraded it ourselves.”

All of this creativity was done at the West Eighth Avenue shop where the business first opened in 1920 and where it continues to operate. 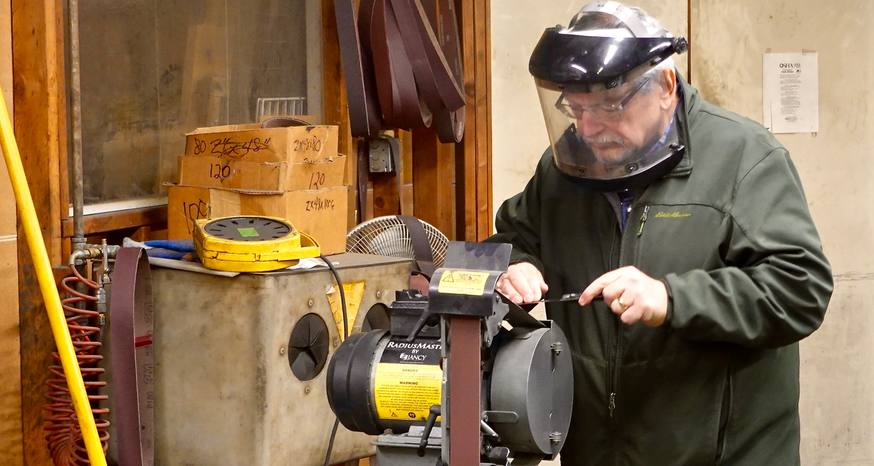 What’s different today, though, is that Fanno saws are no longer being made in Chico.

In spring 2021, Fanno sold the saw business to Superior Fruit Equipment of Washington. That company had been a distributor of Fanno’s saws for more than a quarter century, so the two knew each other well. This was important to Fanno. He only wanted someone to take over the family saw business that he could trust to respect the quality of product he and his ancestors had made for years.

Included in the sale was much of the equipment used to the saw making business.

“We had a long history of innovation in our tools, but it was based on technology from the 1930s and ‘40s. To be competitive in today’s technological environment is tough,” Fanno said. “It was the appropriate time to let it go.”

Now the back room is somewhat empty and in a bit of disarray. Fanno is in the process of going through what’s left, acknowledging some of the equipment has outlived its usefulness.

“There’s a machine in back that weighs 12 tons and has no value. It was used to blank out the saw blades. It’s equipment that has been outdated,” Fanno said. Its future is likely to become scrap metal.

Without saws to build, Fanno is focused on sharpening and sales.

The sharpening side of the business came into being after selling so many saws. Eventually, they lost their luster. Saws, loppers, pruning shears—they all need to be sharpened from time to time in order to be effective.

“We service the tools they use. They rely on us and we rely on them,” Fanno said of the agriculture community.

For years sharpening tools was more of a side business. But it kept growing even without advertising.

The other thing that set Fanno’s apart is no one else had the experience to sharpen and recondition tools. “That was left up to us to fill that niche,” Fanno said. “We contracted out some of the specialized or heavier stuff.”

In the back of the building is a standing abrasive belt grinder where Fanno does his sharpening. Nearby is a bench grinder. Carefully, he runs the blade on the belt to get it ready to be used again. A buffer helps finish the process. He tests the short blade in a block of wood; it goes in almost like butter, proving it is more than ready to tackle vegetables or meat.

Besides home cooks and those in the ag business, non-professional landscapers also rely on Fanno’s. Once a year, for free, he leads a workshop for the Butte County Master Gardeners.

“I think as a gardener it’s important to be educated about tools and tool care,” said Kay Perkins who runs the education committee for the BCMG. “He is entertaining and helps people make good decisions about tools.”

These sessions are usually in December and are open to the public. Often they are announced on the master gardeners’ website or Facebook page. Sign up fast when the class rolls around again because space is limited, with a waiting list the norm.

“He says to look for this kind of steel, this kind of ratchet. He doesn’t try to sell his tools. He tells people what to look for whether it’s his or another brand,” Perkins said. “He talks about the kind of edge to look for and explains why.” He also talks about design, handles and all the other parts of a tool.

The master gardeners recommend getting tools sharpened at the end of the year so they will be ready to be put to use for pruning in January and February.

Fanno admits not everything people want to resurrect should be. Sentimentality, though, for a family heirloom or a favorite knife have people leaving them to be sharpened when buying something new might be more logical.

“We try to accommodate people. We take it as a challenge at times,” Fanno said of mandolin blades, old can openers, and well used hunting knives. “You have to be somewhat diplomatic with what they have.” 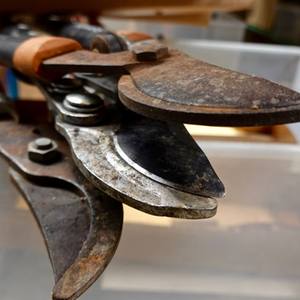 More than knives are sharpened at Fanno’s. (Image: Kathryn Reed)

Selling knives and agriculture tools wasn’t a serious part of the business until the early 1980s. As Fanno tells it, people would ask about products either for themselves or as a gift. Recommendations kept being made. Finally, he realized it would be more profitable to stock items for sale instead of sending people elsewhere.

“We wanted to bring in quality stuff. There was too much of the less quality merchandise available,” Fanno explained.

Kitchen tools and some sporting cutlery are the main focus. There was a phase about 15 years ago when customized collectables were popular.

Value is important. It’s not about carrying the priciest knives; it’s about selling a quality product.

“We watch the trends. I’m looking at a couple lines we might move in,” Fanno said without revealing what those might be.

Three brands of cutlery—Victorinox, Miyabi and Wüsthof—are for sale at Fanno’s. An array of lines of each are available. It’s possible to buy individual knives or complete sets.

“There are a lot of cheap knives out there that I can get, but I want to offer people a product I would use myself,” Fanno said.

If someone could only own one kitchen knife, Fanno says it should be a paring knife or an 8-inch chef’s knife. The combo would be perfect, especially if it were possible to include a bread knife to make it a trio, he said.

In addition to all the culinary knives, there are kitchen shears. Then there are the loppers and smaller pruning tools.

Fanno’s eyes light up when he walks around the store talking about all the inventory. He’s a wealth of knowledge, explaining why the grip is important, how the shape of the blade will allow for various limbs to be trimmed.

He even sells tools so people can sharpen their own blades.

Fanno is the third generation to run the Chico store that was started by his grandfather, Asa—better known as A.A. The youngest Fanno came on board in the early 1970s and has been at the helm ever since. Carl Fanno bought the business in 1949 from his father and ran it until his death in 1976.

With no heirs, the family lineage will end with the 72-year-old. He’s not quite ready to retire, but also doesn’t anticipate working forever. Whether a buyer might come forward remains to be seen, and it would have to be an individual or company who Fanno would trust taking over what remains of his family’s heritage. After all, it’s not just a business, it’s his name that is on saws, the sign, and is a signature of perceived and actual quality.

The company’s longevity helped bring in new clientele during the pandemic, while longtime customers continued and renewed their relationship with the shop.

“It’s hard to find someone to offer quality service. It’s one reason we are still here. There is the trust factor. I think people value someone who is business that long, that you must be doing something right,” Fanno said. “People want that relationship, but we don’t have that as a rule in merchandising and retail.”

Even with Chico evolving into a city of more than 100,000 people, it is still a small town in some regards. Fanno and his shop are evidence of that truth, and that customer service is still relevant.

“I went looking for a certain type of knife and headed toward a more expensive one. (Robb) guided me toward one that was more affordable and I use it all the time. It’s the perfect size for everything I do in the kitchen,” explained Laura Lukes of Chico.

Fanno refuses to upsell people into something they don’t need. But he also isn’t going to carry cheap merchandise.

“I remember watching my dad when customers would come in. He was very gregarious,” Fanno said. It’s a trait he knows is important to this day.

As a one-man shop, it can get hectic at times. Fanno now parcels out some of the sharpening work to a former employee whose business is Richard Moeller Sharpening Service. Fanno’s wife, Linda, helps out with some of the paperwork.

Kitchen knives of all sizes sit in a multitude of cardboard boxes waiting for their owners to pick them up. The teeth of chain saw chains have been sharpened to the point they can split most any wood. They are stored in bags. It’s a system that works for Fanno even though to the untrained eye it looks a bit chaotic.

“My vision is to stay here as long as I can with the cutlery and sharpening business,” Fanno said.

Note: A version of this story first appeared in Edible Shasta Butte magazine.