Churros–The perfect dessert when out in Todos Santos 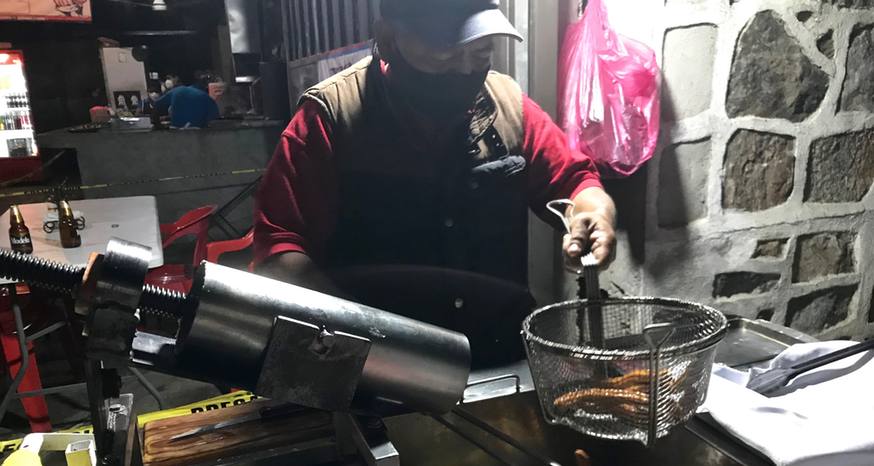 While there is some debate as to what country came up with the first churro recipe, there is no doubt it was the Spanish who brought them to Mexico.

If the United States is the only place you have had one of these doughy confections, don’t let that determine whether you like them. Like so many edibles, it matters where and how they are made, as well as who creates them.

In Spain churros are often eaten in the morning, much like having a doughnut for breakfast. On the streets of Todos Santos the churro makers usually don’t come out until near dusk or after dark. It’s like these people magically appear with their portable churro makers.

The batter is squeezed through a chute of sorts called a churrera. Most have a star-shaped nozzle which gives the churro the rigged lines down the length of it. The dough drops into a sizzling vat of oil. It doesn’t take long for them to crisp up on the outside and be cooked all the way through.

What makes the churros better south of the border is they are not super hard and the inside is soft. Some will be oilier than others, with the better ones not being greasy. The oil—what is used and how old it is—will also affect the final product.

It is amazing how something made from flour, water and salt can taste different and so delicious.

At a Todos Santos stand a bag of six (we got an extra one—guess he thought that would be easier to split between two) cost 40 pesos, or about $2. We passed on the option to add chocolate sauce, caramel or condensed milk. The cinnamon sugar that is added right after the churros are pulled from the oil was sweetness enough for dessert.