Damiana — a Mexican liqueur that doubles as an aphrodisiac

Sometimes it’s a good idea to say yes even if you have never tasted what is being offered. How else will you know if you like it or not?

Such was the case when the waiter at San Toro in Todos Santos explained what damiana was. The menu had a few margaritas, with one having this liqueur in it. Neither my niece nor I had heard of it. We took the “just yes” approach and were happy with our decision. 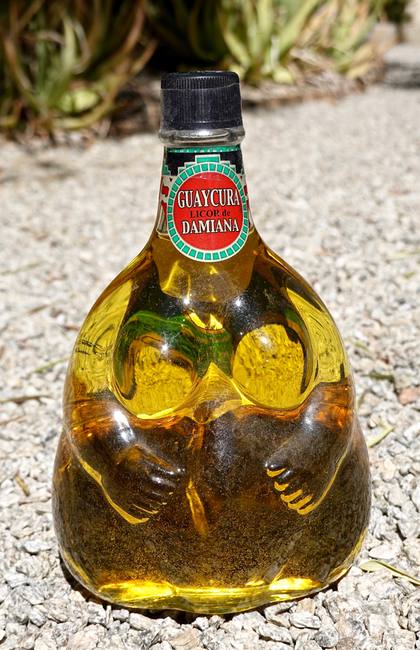 Damiana is a Mexican liqueur that supposedly acts as an aphrodisiac. (Image: Kathryn Reed)

Of course it cost more, but it was worth it. This is in contrast to when I’ve had margaritas in the States with grand marnier. I’ve never been impressed with a grand marnier float or mixed in. Perhaps this is because it is an orange liqueur just like the Cointreau I use when making a margarita. It’s really a waste of money.

Damiana is sweet, but also somewhat earthy. It’s worth the extra pesos.

It can easily be a substitute for simple syrup in margaritas because sugarcane is part of the final product.

Fortunately for me, Veronica had a partial bottle to dispose of when she headed back to the States. I was able to try it other ways at her expense, so to speak. I then had to get my own bottle.

This amber liqueur was discovered by the Guaycura Indians in Mexico. They used it for religious ceremonies.

While more than one company makes damiana, the largest Mexico producer puts it in a unique bottle. It is called Guaycura Licor de Damiana. The bottle looks a bit like a pregnant woman and resembles the Inca god of fertility.

This makes sense because the damiana plant is considered an aphrodisiac. It also is said to relieve stress, insomnia, and aches and pains.

The plant with bright yellow flowers grows in Baja California Sur and other subtropical locales like Central and South America, the Caribbean and southern Texas.

I’ve had damiana in hot chocolate, neat, in a margarita made with tequila and one made with mezcal. All are terrific, but the cocoa was my favorite because of a distinct cinnamon taste that I didn’t get having the other ways. The dried leaves of the plant can also be brewed into a tea.