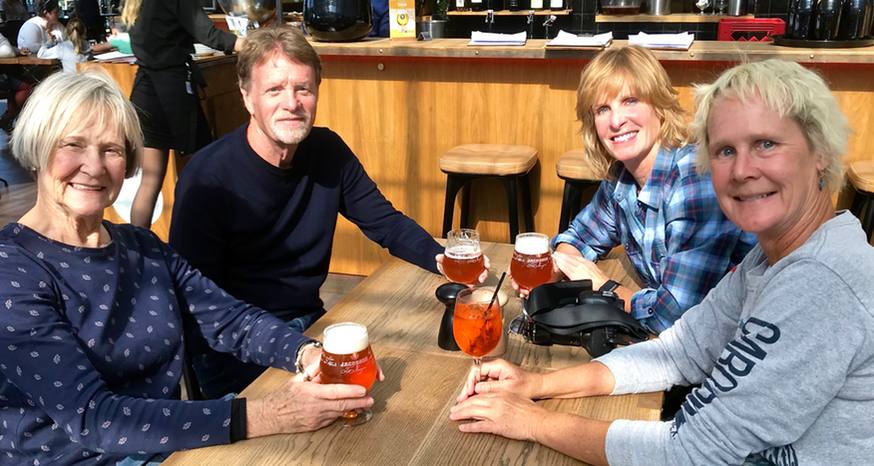 Taking a break from being tourists with a drink at Illum, a rooftop bar in Copenhagen; Cleo, Tom, Pam, Kae.

The delicacies of my ancestors are not ideal for a vegetarian. I was in Denmark in May with my mom, two of my sisters and their husbands, and my two nieces. The bulk of the gang tried herring cooked different ways at one restaurant. It wasn’t ever ordered again. Still, one of the highlights of my trip to Copenhagen was the food tour.

“Skull” is now my favorite way to toast; instead of saying cheers as they do in the U.S. or salud in Mexico. At the brewery stop we learned this salutation came about during the days of the Vikings when they would drink out of the skulls of their enemies. Fortunately, our beer came in regular glasses. Our guide selected an IPA and stout from the 61 beers on the menu at Taphouse. Mom preferred the lighter beer, I was happier with the darker. 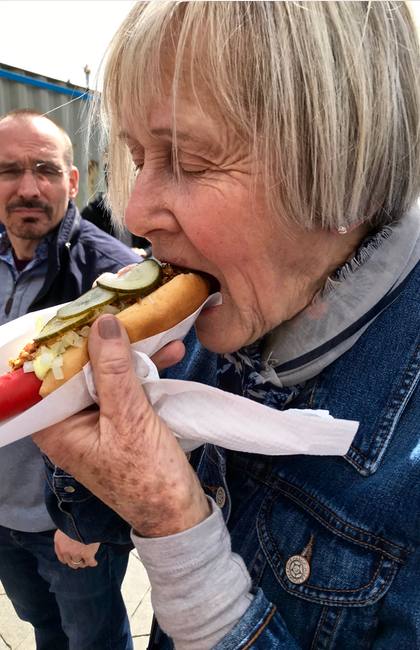 While Carlsberg and Tuborg are the better known Danish beers, multiple microbreweries are scattered about, with taps at various restaurants.

There is no official drinking age in Denmark. At 16 people can start buying beers with a certain alcohol percentage, and at 18 they can buy anything. Laura, our guide with Sandemans tours, said the belief is this creates a healthier relationship with alcohol. There was a time when the water was not drinkable, so people drank beer for hydration. “We say beer is in our blood, literally,” Laura added. 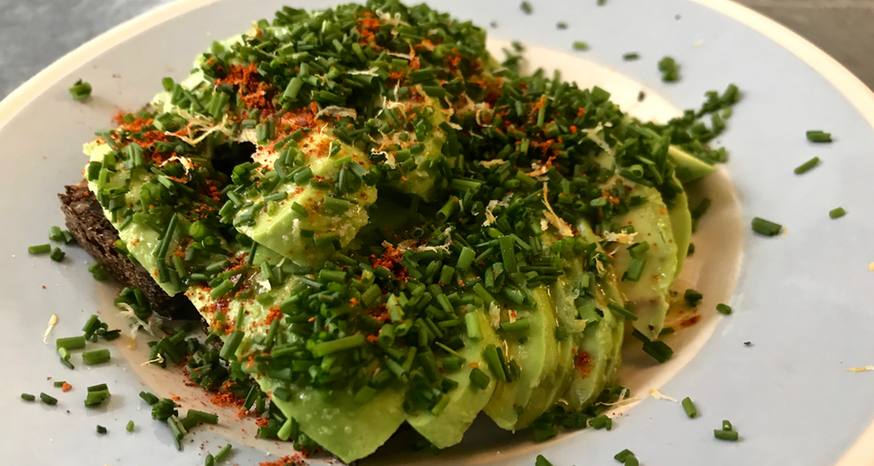 Our first stop had been at the hot dog stand near city hall. These small operators are at various corners in the city. Traditional toppings are ketchup, mustard, remoulade, fresh onions, fried onions and sweet pickles. I ate part of the wheat bun with toppings but no dog. Most of the nearly 20 in the group seemed to like their dogs, which had a red casing. This is old school when the meat wasn’t always the freshest so they had a red casing to make it more appetizing. Now, no matter the casing color, all is fresh. 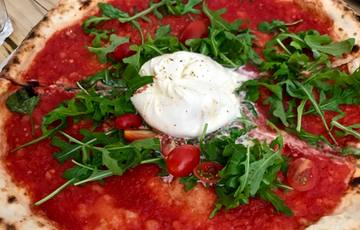 Pizza dough at Mother’s is made with water from the sea. (Image: Kathryn Reed)

The third stop was at Godtfolk restaurant where we were served smørrebrød. This is a traditional open face sandwich. It starts with rye bread smothered with butter, then is topped with almost anything. Herring, with the abundance in the waters around Denmark, is a staple. Cold cuts on top of rye is common to take to work. Mom’s rye had a soft boiled egg, with a mayonnaise dill sauce and shrimp. Mine had a cucumber and tomato instead of the shrimp.

It seemed like some form of smørrebrød was on most menus; some fancier than others. The thing with rye bread is that it is so dense it quickly fills you up. My mom remembers her aunt (of Danish heritage) making rye bread, slicing it thinly and then putting gobs of butter on it.

Laura, the guide, popped into a neighborhood store and came out with a bag of black licorice. It was so different because it was salty. I don’t usually like mixing salt and sugar. However, I was intrigued enough that I bought a bag at the airport on my way home. It didn’t make it back to Mexico, and not because I ate it all. I decided salty licorice really isn’t good. 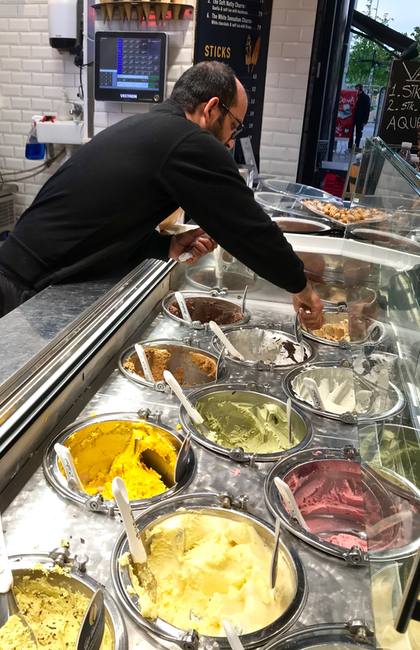 Ice cream shops are all over Copenhagen. (Image: Kathryn Reed)

Our final two stops on the food tour were inside Torvehallerne, an upscale food court. First up was a Danish meatball that had seafood instead of meat. This was the one place where there was no substitute for a vegetarian. By this time mom was pretty full, but she said it was good. I was happy we ended at Summerbird with its organic chocolate. The bulk of my family returned to this market later in the week. Several of us bought various chocolates. The amber, a white chocolate, was my favorite. I’m not sure if these gifts will make it to their intended destinations.

Grød, another restaurant in Torvehallerne, was another stop with the family. When it opened in 2011, it was the first porridge bar in the world. Those who indulged said it was good. The fresh vegetables at the market were beautiful. It made me want to make dinner for myself.

The pork dish at Det lille Apotek came with the sides on one plate. (Image: Kathryn Reed)

Illum was a wonderful spot for a cocktail and people watching. This rooftop bar is actually multiple restaurants sharing the same roof.

Four in our group went to Noma, which four times has been rated the No. 1 restaurant in the world. It now does three seasonal menus a year, with seafood the theme while we were there. That, and the $380 price plus another $205 for the wine pairing, had me plenty happy to dine on pizza that evening with the other three non-Noma participants. 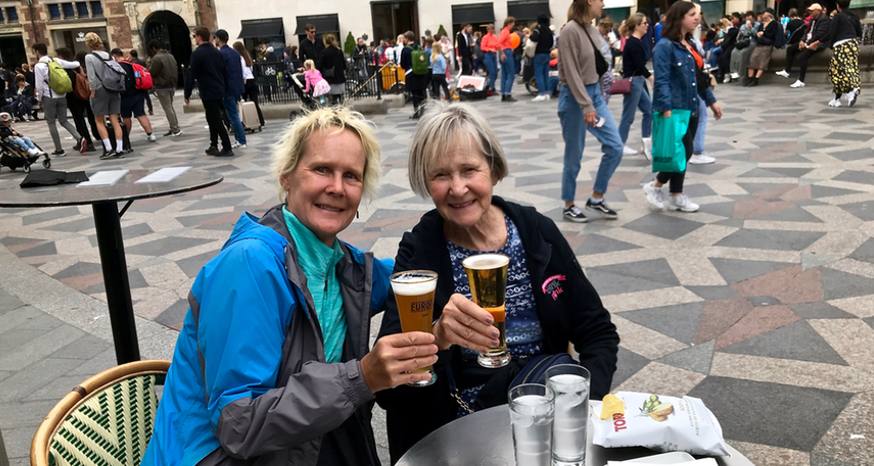 Kae and Cleo indulging in a snack — beer and potato chips — at Europa.

Mother’s, in the old meat packing district, is where we went on that Friday night. It was packed with what we figured were locals. The pizzeria is known for its salty sourdough crust that is made with purified sea water. I couldn’t taste anything special about it. The pizzas – three at our table of four – all looked pretty. The thin bottom crust, though, got soggy pretty fast.

We started our group culinary eating at Ristorante Italiano. When it opened in 1952 it was the only Italian restaurant in Copenhagen. Café Oscar had one of the best tomato soups I’ve had. Det lille Apotek, which has been around since 1720, was chosen as an authentic Danish restaurant. Pork is popular in Denmark. Those at the table who had it didn’t leave any on their plate. 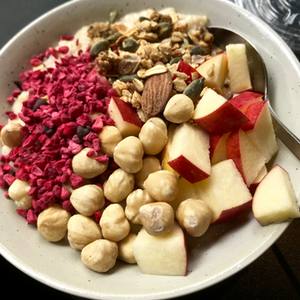 Grød is known for its porridge and various toppings for it. (Image: Kathryn Reed)

Instagram has never been the way I choose where to eat. Travel with a millennial and that reality changes. Breakfast at Café Atelier September was chosen by my niece based on it having the most Instagrammable avocado toast. It was pretty. I don’t usually order avocado toast, so I can’t say how it rates photographic-wise against others. I know it was salty and that I would not recommend it, especially at nearly $13. I’m going back to my dining choices being based on what people say about the quality of food and not how many times it was tagged on social media.

What I enjoyed most was having a beer and fries at various places, and the ice cream. All of my comfort foods. The pastries were all worth sampling as well. Had I not been traveling with seven meat eaters, my dining choices would have been different. I can’t honestly say if Copenhagen is good or bad for a vegetarian.