Doses of history, wine and spirituality all in one setting

The monks would surely say it was the power of prayer, keeping the faith, and believing in divine intervention that finally allowed them to complete a significant structure at the Abbey of New Clairvaux.

This religious enclave in Vina 20 miles north of Chico and 20 miles south of Red Bluff is home to Trappist-Cistercian monks. They have owned the 580 acres, which includes land dedicated to vineyards, since 1955.

Using stones from the Cistercian Monastery of Santa Maria De Ovila in Trillo, Spain, the California monks have a house of worship that is to be envied. While the public cannot go inside today because of the pandemic, it is possible to walk the grounds, read the history, and sip wine.

Public services at the Abbey of New Clairvaux are suspended because of the pandemic. (Image: Kathryn Reed)

The Abbey of New Clairvaux was given the stones in 1994 by the Fine Arts Museums of San Francisco with the agreement they only be used for a chapter house. This is the only place to see Cistercian-Gothic architecture in the United States.

Sixty percent of the stones could be salvaged. What couldn’t be used for the building have been incorporated into the landscape and for non-structural purposes. Other stone came from limestone quarried in Texas.

Originally the plan was keep the structure as the chapter house. According to information at the site, “Although the chapter house is an important place at the abbey, as it is the place for the large community gatherings and meetings, it soon became evident that a building so profound and substantial should become the new abbey church.”

In 2012, plans were put into place to make this a reality. The groundbreaking was in 2016, with a consecration ceremony two years later. This was all possible with a generous donation. Those details have not been disclosed. 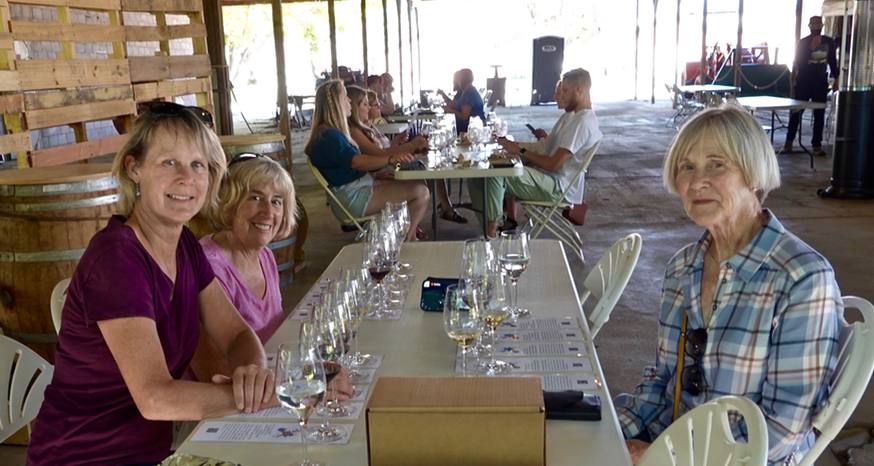 Since I was last there in 2013, a wall explaining the evolution of the grounds has been installed. This is somewhat of a California history lesson. It alone is worth the drive.

Beyond the religious aspects of the abbey are the wines. Instead of sipping in the tasting room pourings are now done in the old tractor barn that doesn’t have walls. This was actually a more pleasant experience because the three of us had a table to ourselves. Instead of a worker explaining the wines before us we could log onto a QR code to get a short video about the varietal.

We were allowed to taste two wines outside of the five they selected. We all were most impressed with the 2018 Aimee NV Merlot ($35); and now we all have at least a bottle to remember such a fun, informative day. The other wine I was taken by was the 2019 St. James Viognier ($18). The tasting room has been open since 2005.