Corn snack found on streets of Mexico a decadent treat 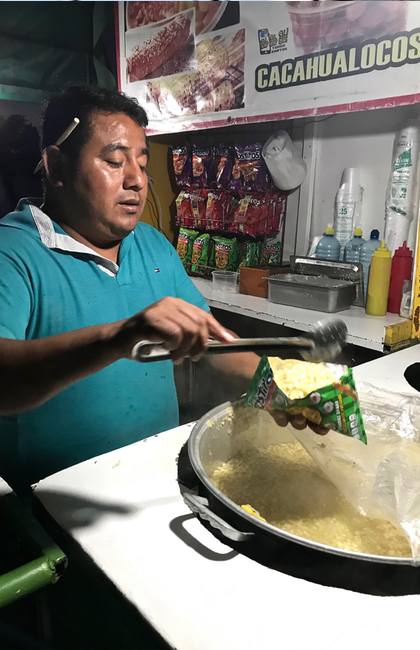 Street food in most countries is an experience in culinary art not found in a restaurant. It can be better, more authentic.

One of my favorites in Mexico is esquites. It’s like nachos in a bag, with corn being the dominate ingredient. The name comes from the Aztec word ízquitl meaning toasted corn. It would have been served in a cup or vessel of some sort before packaged foods came along. Today it could easily be made in homes with totopos – tortilla chips — of any kind. Without the chips, it could be a salad of sorts. 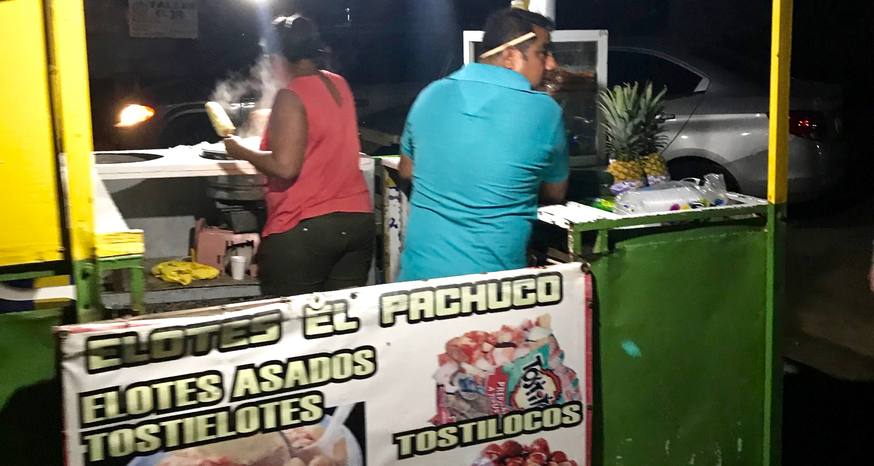 A small stand selling esquites is open year-round on the south side of Todos Santos. (Image: Kathryn Reed)

My niece, Veronica, introduced me and my mom to this treat in Todos Santos. While most people would have this as a snack, it’s been a meal for me since then. That night the three of us shared one.

I watched as the bag of Tostitos was slit open along the side to make a pouch. Veronica adeptly communicated in Spanish what ingredients to put on. Corn kernels cooking in a large vat of water were scooped out and spread over the chips. I don’t know what all was piled on except crema, which is like sour cream, hot sauce and Cotija cheese. Lime juice, mayonnaise and chile powder are other common ingredients.

The combination is decadent, delightful and definitely not healthy. 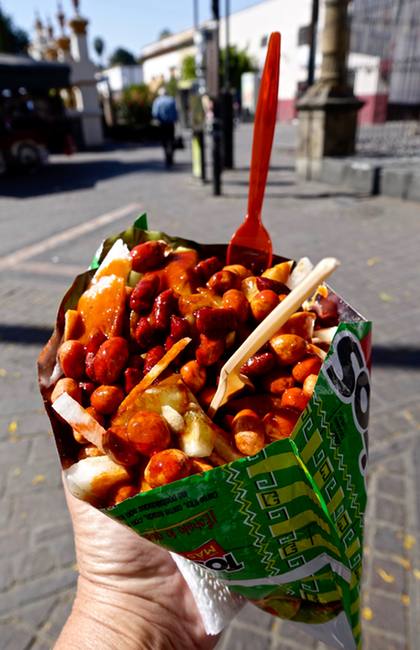 Esquites with toppings including jicama and peanuts in Tlaquepaque. (Image: Kathryn Reed)

Veronica likes to squeeze the bag so the chips break into pieces. This is easier for eating; which is done with a fork or spoon. I wish the proprietors would crunch the chips before the ingredients are poured on; it can be tricky doing so with a full bag.

I would gladly have this more often, but the little cart in Todos Santos is only open at night. I’m too lazy to drive to the other side of town. Plus, it really is something that should be shared. I was excited during the Day of the Dead festivities last fall to see esquites being sold close to the town square. I converted Sue to being a fan of this treat.

When I was on the mainland last year there was a stand in Tlaquepaque selling esquites; something Rhoda and Liz had not had. Options for toppings were much greater there, which included beans and meat. We skipped the latter. With Rhoda well versed in the language, we knew what we were getting. By the time it was loaded up two hands were practically needed to hold it because it was so heavy. The three of us had no problem devouring it. We were sufficiently stuffed; making me wonder how I ever finish one on my own.