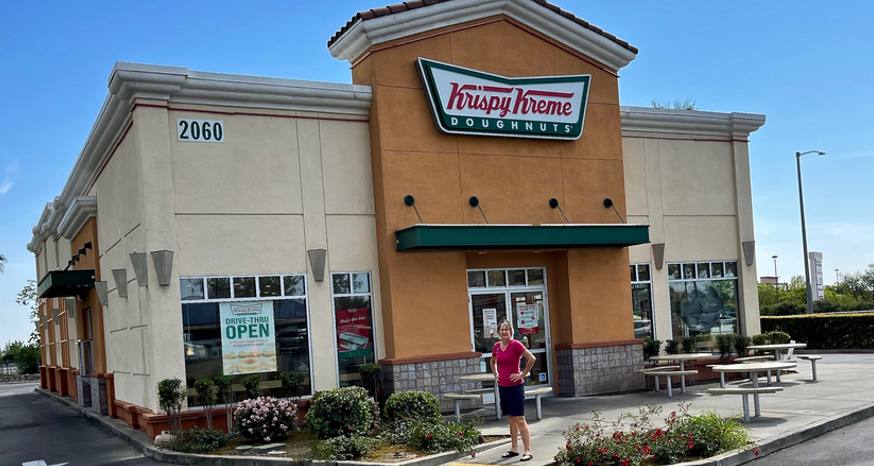 Chico’s Krispy Kreme is one of the participating locations for the freebie for vaccinated customers. (Image: Cleo Reed)

I just got vaccinate and can’t sit still. It must be the sugar rush.

My reward for being jabbed with the second dose of Moderna on April 19 was to take Krispy Kreme up on its offer for a free doughnut to anyone with a vaccination card. Mom and I each flashed our cards at the drive-through in Chico.

It had been years since either one of us had had a Krispy Kreme. Oh, my. It was so decadently delicious. This could be dangerous. I better not travel with my vaccination card to avoid OD’ing on these warm, light, fresh orbs of sugary pleasure.

The North Carolina-based company started the promotion on March 22.

“We all want to get COVID-19 behind us as fast as possible and we want to support everyone doing their part to make the country safe by getting vaccinated as soon as the vaccine is available to them,” said Dave Skena, Krispy Kreme spokesman. 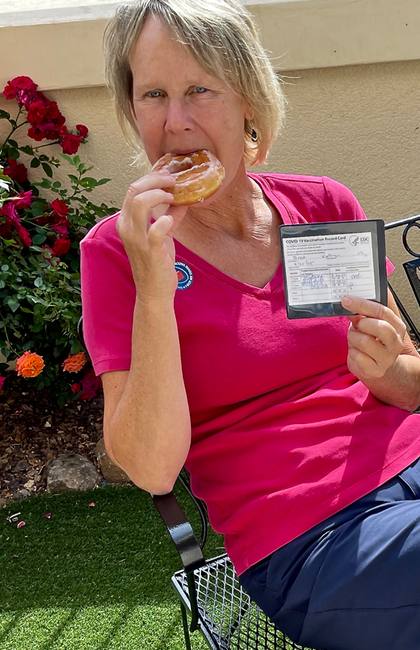 Kae chowing down on a free Krispy Kreme doughnut as she shows off her vaccination card. (Image: Kathryn Reed)

The company would not reveal how many people have received a free doughnut through this promotion, let alone details about specific locations.

People can get an original glazed doughnut every day if they want for the rest of the year—assuming they are vaccinated. The promotion is available at nearly 12,000 grocery, convenience and mass merchant stores in the U.S. along with its 369 shops in 41 states. You have to go in person; promotion is not valid online or via delivery.

Krispy Kreme has been around since 1937. The first California location opened in 1999 in La Habra in Southern California. The company went public the following year.

The first store outside the U.S. opened near Toronto, Canada, in 2001. Now there are more than 700 stores in 33 countries. There are more than 100 locations in Mexico. On the mainland the cities include in Mexico City, Puebla, Cuernavaca, Monterrey, Leon, Guadalajara, and Aguascalientes. There is also a Krispy Kreme in Cabo San Lucas in Baja Sur. Entrepreneurs have been known to bring doughnuts across the border and sell them in northern Baja towns.

That daily freebie is not all the company is doing during the pandemic. The company is delivering free doughnuts to select vaccination centers throughout the country for workers. Krispy Kreme employees get up to four hours of paid time off to get the COVID-19 vaccine.