Do you remember what you last ate? Do you know when you will eat again? Is it easy to satiate hunger pangs?

Be lucky if you answered yes to those questions because 1 in 10 people in the United States do not have enough food to eat. That is more than 35 million people. COVID-19 has only exacerbated the problem as people struggle to work and students are not at school to receive a free or reduced meals. With unemployment benefits running out, those numbers are likely to increase. It hasn’t helped that food prices have risen dramatically during the pandemic. 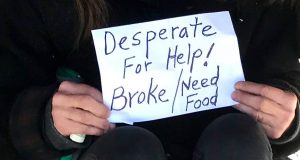 Food insecurity is a growing problem in the U.S. (Image: Kathryn Reed)

The Census Bureau conducted a study in August with results released in mid-September that show food insecurity for children was at 16.8 percent in mid-June and rose to 19.9 percent a month later.

The U.S. Department of Agriculture defines food insecurity as “a household-level economic and social condition of limited or uncertain access to adequate food.” Hunger by U.S. government definition is “an individual-level physiological condition that may result from food insecurity.” In simple terms, food insecurity can mean you don’t know where your next meal is coming from.

The Washington Post on Sept. 15 sponsored a webinar about food insecurity. Soledad O’Brien, producer of the movie “Hungry to Learn,” and Sara Goldrick-Rab, a professor at Temple University who is in the film, talked about what is going on at college campuses in the United states. The documentary is based on Goldrick-Rab’s study about food insecurity among college students. Results of the fifth study that she has conducted were released pre-COVID.

It was revealed that 45 percent of college students experience hunger at some point. “These numbers can only be this large if there is a systemic problem,” Goldrick-Rab said.

Some students had free or reduced breakfasts and/or lunches in K-12. The federal government does not have an equivalent program at the college level. Those with needs are from diverse backgrounds, it’s not just the poor. It could be that mom and dad are not helping out even though the student came from a middle or upper middle class family. It could be that even in middle class homes money was too scarce to save for college. Many students have jobs that help them put food in their mouths. Most of those jobs evaporated when the pandemic hit, thus creating an even larger problem. So many jobs do not come with a livable wage. The federal minimum wage is $7.25 an hour; this took effect in July 2009.

Food on college campuses is big business. The movie says, “The college food service industry made an estimated $18 billion in 2018.” Not everyone, though, can afford to dine on campus.

Food pantries exist at more than 650 colleges, including Lake Tahoe Community College. Students in South Lake Tahoe may visit the pantry twice a month and must meet income eligibility guidelines. Most of the food comes from grants and donations.

“It’s really hard to get students focused on studying when they don’t have enough to eat,” Goldrick-Rab said. They are having to choose between going to college and eating.

O’Brien said, “There has to be a federal response to help these students.” In July 2019, Sen. Kamala Harris (D-Calif.) introduced the BASIC (Basic Assistance for Students In College) Act.

The bill, according to a press release from Harris, would provide “legislation to ensure that college students—particularly those receiving Pell Grants or attending a community college or minority-serving institution—are able to afford basic, day-to-day necessities.” The release goes on to say the act would:

The bill has not gone anywhere since it was introduced.

O’Brien and Goldrick-Rab are encouraged more people are talking about the issue, that educators are recognizing the problem, and that at least one presidential candidate and his vice presidential nominee are raising the alarm bell on the campaign trail.