While Kahlúa was first created in Mexico in 1936, it isn’t that popular in Baja California Sur. Sure, all the bars are stocked with it, but beer and margaritas seemed to be the adult beverages of choice. Maybe it has to do with the price or it could be because it doesn’t seem like a thirst quencher, plus not everyone likes the flavor of coffee. 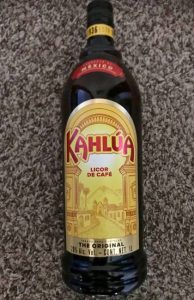 But clearly someone is drinking it. According to statista.com, “The coffee liqueur, which is manufactured by Pernod Ricard, recorded volume sales of 1.6 million 9 liter cases worldwide in 2019.” Kahlúa became the No. 1 selling coffee liqueur in the world in 1980 and still has that honor today. It was first imported to the United States in 1940, and can be found in most countries now.

The company has grown from its humble beginnings. Pernod Ricard USA, according the kahlua.com, “is the premium spirits and wine company in the U.S., and the largest subsidiary of Paris, France-based Pernod Ricard SA., the world’s second-largest spirits and wine company.” The creation came about when three guys in Veracruz, Mexico, decided to blend their interests. Two were growing Arabica coffee and the other was a chemist.

While at first Kahlúa was drank straight—neat or on the rocks, and still is—it is now common to mix it with other liquids. It was in Brussels that the Black Russian—Kahlúa and vodka—was created. In 1955 the White Russian (Kahlúa, vodka, cream) was first made in Oakland, California. Calgary, Canada, is credited with the birthplace of the B-52 in 1977—Kahlúa, Irish Cream and Triple Sec. There are countless other ways to mix Kahlúa.