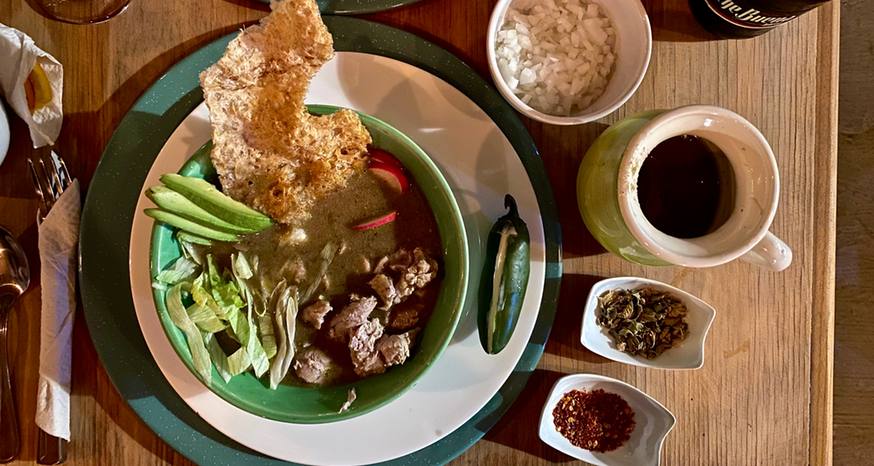 Pozole is a traditional Mexican dish that has been served for centuries. (Image: Veronica Wong)

Food is one of the most important ways for us to connect with others—be it those we know or strangers.

Travel the world and food will be a common denominator. We all need it for sustenance, but it’s so much more than nourishment. Food can tell a story about the people, the region, the land, even the history of an area. Perhaps more important, with that shared meal comes shared memories.

Food easily touches on all the senses—sight, smell, taste, touch, and hearing. Hearing can be the slurping, chopping, popping of a cork—even the conversation.

Pozole is one of those traditional Mexican dishes that brings people together. The origins are not well defined, but history proves the natives were making this concoction long before the Spanish arrived in the 1500s.

While pozole traditionally has chicken or pork, those can be left out or mushrooms substituted to satisfy vegetarians. A green pozole usually will have tomatillos, the herbs epazote and cilantro, and jalapenos, while a red pozole uses guajillo, piquin or ancho peppers. The verde version is more popular with chicken. 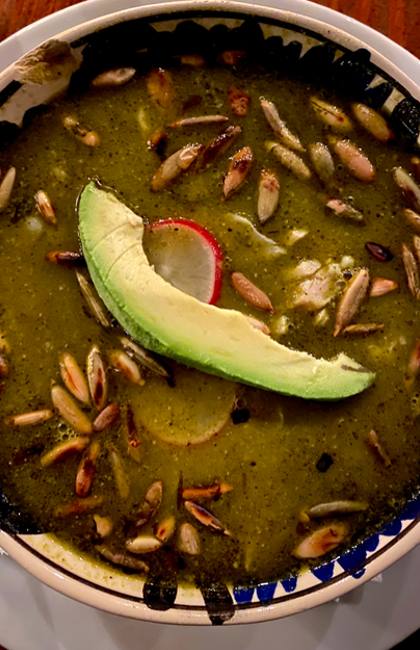 When Los Consuelos was open in Todos Santos (it closed in March 2020 because of COVID and has not reopened) the pozole presentation was outstanding. The bowl was full of meat, shredded cabbage, sliced radish, and slivers of avocado. Then at the table the broth was poured over this ensemble. The diner had assorted condiments to choose from like onions and more spices.

At El Refugio in Todos Santos pozole is served more traditionally with the broth in the bowl when it is brought to the table.

Los Consuelos’ version was more like a stew compared to El Refugio being more like a soup. The difference being soups have more broth.

What all pozoles have is hominy. These large corn kernels have been soaked in a mineral bath to remove the husk. This isn’t sweet corn, but instead is field maize that is used to make flour and cereals. It’s chewy, with almost a rubbery texture. Today hominy is available in cans at grocery stores, which eliminates a lot of the work for this dish.

While it is a soup, it is so much more. For those making it, there are many moving parts. Best to have at least one sous chef to help with all the knife work. For those with spoons in hand, the dish can be personalized depending on how the condiments are served and how many are offered.