More bananas are eaten in the world than any other fruit. While commercial production is a big deal, most are grown for local consumption.

It can take a year before it’s time to remove the peel and ingest what’s inside. Commercial enterprises might start production at nine months.

Bananas typically grow in hot, tropical climates—which includes areas of Mexico. About 150 countries grow this fruit, with Southeast Asia being where they were first discovered. Today, more than half of the bananas in the world are grown in India, Ecuador, Brazil and China.

It’s not uncommon for people to have banana trees in their yards in Baja California Sur. Often the ones in Todos Santos are smaller than the commercially produced ones found in a grocery store. They are more firm and sweeter, and ready to eat even when the peel is green. 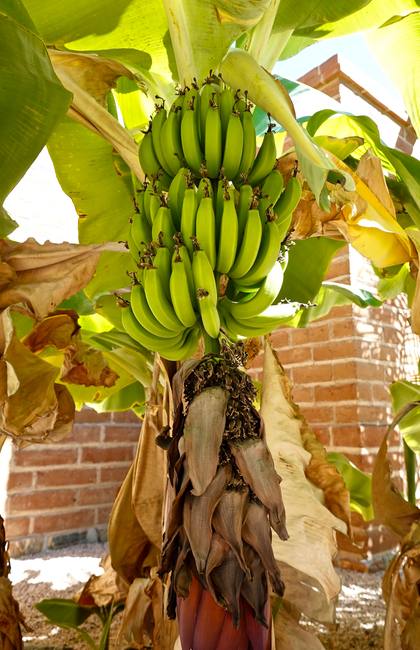 Bananas being grown at a home in Todos Santos. (Image: Kathryn Reed)

The difference is because there more than 1,000 types of bananas in the world. Mexico primarily is home to these varieties: Dominico, Valery, Pera, Tabasco, Morado, Manzano, Cavendish Gigante, and Macho.

While it looks like bananas are trees, they aren’t. They are perennial herbs that are related to lilies and orchids. They grow from a bulb or rhizome, not a seed. It would be hard to know this just by looking at them. Some of these non-trees can be nearly 50 feet tall.

The leaves are distinguishable and often hide the actual fruit that might be growing closer to the trunk. These green leaves can be nearly 9 feet long and 2 feet wide.

Multiple bunches grow on top of each other, which means individual homeowners will have a ton of bananas getting ripe at one time.

The large production areas are on the mainland in the states of Chiapas, Tabasco and Veracruz. Combined they represent more than 60 percent of Mexico’s banana crop. They are exported to 43 countries, including the United States.

“Exports of bananas from Mexico have annually increased between 2012 and 2018, amounting to 270 million U.S. dollars in the latter year. This is more than double the export value reported in 2012. Production of bananas in Mexico  reached 2.24 million metric tons in 2018,” according to Statista.