Mexico once the standard-Bearer for pure vanilla

Considering so many recipes only call for a teaspoon of vanilla, is it really that important which extract one uses? The answer, like so many things, all depends upon who you ask.

Pure vanilla is definitely better than imitation. But what about the country it came from? 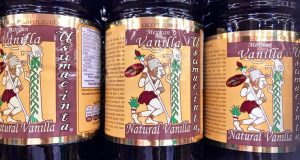 Mexican vanilla was once in high demand. (Image: Kathryn Reed)

My Todos Santos friend Susan said, “I don’t use the vanilla from here. I use Kirkland which I think is very good.”

My Arizona friend Penny said, “I love Mexican vanilla. It seems a little stronger and maybe even a tad sweeter, if vanilla can ever be considered sweet. I think it has a wonderful smell and flavor. It’s not hugely different, but different enough that I prefer it to the vanilla I buy here.”

“It used to be that is was more pure and thus stronger and more flavorful. Check the ingredients and if there aren’t additives, it is great stuff,” my friend Jill said of Mexican vanilla.

It’s important to read the label to know if it’s pure vanilla or imitation. Finding authentic Mexican vanilla extract can be difficult because Mexico doesn’t have strict labeling laws. The beans might not even be from Mexico and additives are possible.

Vanilla was first discovered in Mexico. Today, according to reports, in terms of tons of vanilla produced it is No. 4 in the world behind Madagascar, Indonesia and China. It was used as a perfume of sorts before it began being added to drinks for flavoring.

“Grown from an orchid, vanilla beans are one of the world’s most difficult crops to cultivate. After harvest, the beans require an arduous and tricky nine-month process of sun drying to cure properly. Vanilla simply does not lend itself to mechanization or other methods of mass production,” according to CooksVanilla.com. “From start to finish, vanilla beans are produced by hand. This method is feasible only in poor countries where wages are low.”

Because of the process to bring pure vanilla extract to market it is pricey no matter what country makes it. It has been called the most labor-intensive crop in the world. The sad irony is locals in the country where vanilla extract is produced often cannot afford to buy it. That is why artificial extract is on the shelves.

Today, the United States is the largest consumer of vanilla, followed by Europe.