In Baja California Sur, people don’t say pick me up some sparkling water. They name it. Bring Topo Chico.

Besides drinking it straight, many use is as a mixer. Locals and gringos are regularly seen buying Topo Chico it in Todos Santos. It seems to be a staple in most people’s diets. 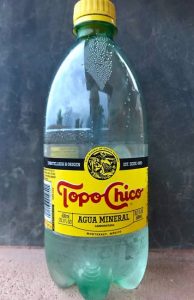 This marks the 125th year the company has been in business. While its roots are in Mexico, the beverage is a cult favorite in the United States as well. The water flows naturally from a limestone spring in Monterrey, Mexico, on the mainland. The name comes from the nearby mountain, Cerro del Topo Chico.

According to the Topo Chico website, the water “can be used for quenching thirst, assisting in the digestive process, and it’s a great hangover remedy.” Although it is naturally carbonated, more carbonation is added to restore any that had been lost in the bottling process.

The sparkling water sector is big business, with it expected to be a $5.5 billion industry in 2020. The Coca-Cola Company in 2017 decided to tap into that market by purchasing Topo Chico for $220 million. The negative of this acquisition is the price went up, at least in the United States. The positive is that the water is now more widely available. It can be ordered online through Amazon and WalMart.

Coca-Cola is expanding Topo Chico’s reach to be an alcoholic drink. A hard seltzer will be available in some parts of Latin America later this year, and in the United States in 2021. Coke’s first venture into the alcohol market was in Japan in 2018. The non-alcoholic beverage also comes in lime and grapefruit flavors.