Drought made the spring harvest of chili peppers in northern Mexico dismal at best. This in turn has led to a shortage of Sriracha throughout the United States and everywhere it is exported.

Many people think Sriracha is imported into the United States, but it’s actually a Southern California company that makes the spicy sauce. David Tran started Huy Fong Foods in Irwindale in 1980. Chinese by birth, Tran immigrated to the U.S. from Vietnam. 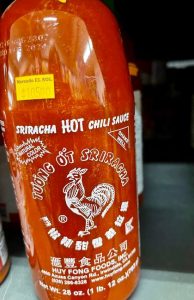 A few bottles of Sriracha sit on the shelf at El Sol Dos market in Todos Santos on June 23. (Image: Kathryn Reed)

“Sriracha is actually made from a very special type of pepper that only grows in the southern U.S. and northern Mexico,” Murray Tortarolo with National Autonomous University of Mexico, told NPR.

The company has not disclosed exactly where in Mexico it is sourcing the chilies, but said it is hoping the fall harvest will be more successful.

“We have several sources sometimes and we don’t want them to know who each other are,” Donna Lam, executive operations officer for the company, told the Los Angeles Times.

Prior to a 2017 lawsuit with Underwood Farms all of Huy Fong Foods’ chilies came from the Ventura County outfit. Since then chilies have come from Mexico, New Mexico and California. Today, Mexico is the sole provider.

This spring the company sent an email to customers stating, “Currently, due to weather conditions affecting the quality of chili peppers, we now face a more severe shortage of chili. Unfortunately, this is out of our control and without this essential ingredient, we are unable to produce any of our products.”

The bottle with the rooster and distinct green cap is a favorite in cuisine of all kinds. Sriracha is super popular in Vietnamese food. Often a bottle of it is on the table at Vietnamese restaurants much like ketchup is at a burger place.

However, according to NPR, “The original Sriracha is actually Thai—and comes from the seaside city of Si Racha, where most residents haven’t even heard of the U.S. brand, which is now being exported to Thailand.”