Private session with TSB brewmaster a lesson in all things beer 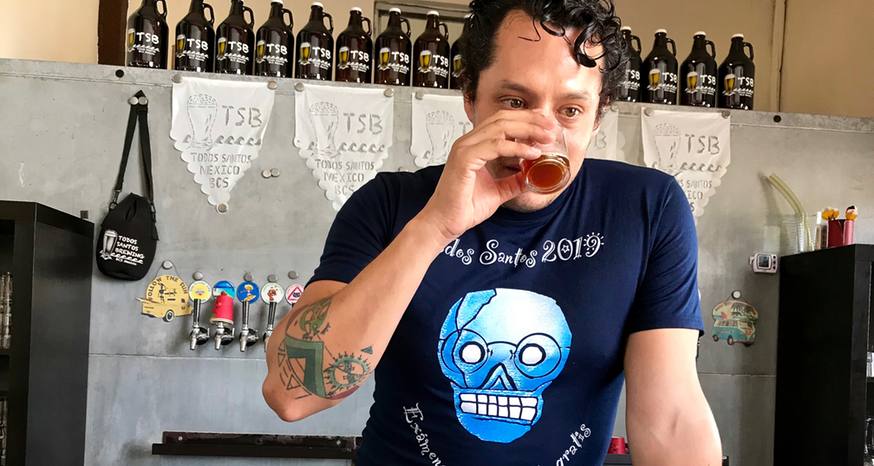 Seventeen beers later and I was ready for another.

Jair, the head brewer at Todos Santos Brewing, was happy to oblige. He led me and Darla through a tasting of these craft brews, imparting details about the brewing process, a bit of history about the brewery, and the differences between the flavors. Then he gave us a tour of the facility as we sipped on a full pint of our choice.

By then we were ready to order off their menu – mostly burgers, with a portabella for vegetarians.

Known as Brewer Talks, this is an opportunity to taste a majority of the more than 20 handles at the brewery and gain some knowledge. Because Darla can speak the language of beer, Jair was able to bring more depth to the conversation. It went beyond the alcohol percentage, IBU (international bitter unit), and SRM (standard reference method). After all, those three measurements are on the menu. 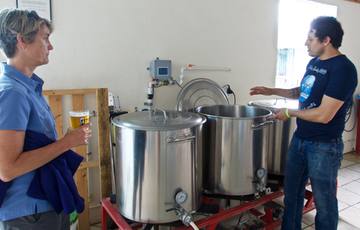 Like wine tasting, we paid attention to the smell and color of the beer before taking a sip. We cleaned out the glass after each beer so as not to blend flavors. Water was encouraged to help cleanse the palate.

Jair expressed how important the water is for the end product to taste good; with water being 80 percent of the reason a beer tastes the way it does. Todos Santos Brewing gets it water from the Sierra de la Laguna mountains that surround town. Malt, hops and yeast round out the main ingredients. The quality of those goods, according to Jair, will also affect the final product.

It’s the yeast that can bring bitterness, while the malt gives beer color. Malt also has sugar, so sometimes it’s necessary to extract it in the masher. The more sugar in the beer, the more alcohol there will be, Jair, tells us. Sweetness can lead to hangovers.

Plenty of other things can be added to beer. That red color some of them have – not natural. It’s usually caramel that is added. Ginger, cinnamon, Orange Juice – all have been added to a TSB beer at some point. Jair likes to experiment. He adds coffee to the Midnight Oil Black IPA. There’s even a gluten free option, which is more like a cider.

A beer like the Toucan Tropical IPA uses three malts and five kinds of hops. It created a sensation in our mouths, leaving a bit of an aftertaste. The haziness is because of all those hops. Whereas the Day Drinker Session IPA didn’t have as much of an aftertaste, but a citrusy smell was evident. 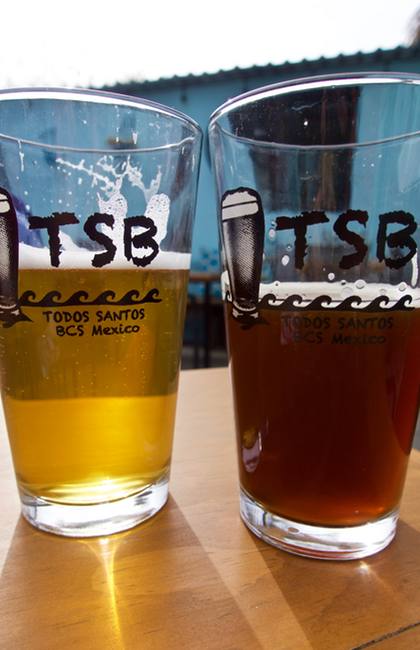 The Phoenix Amber Ale was created after last year’s fire at the brewery. Jair said every time he drinks it he sees the blackened brewery, and reflects on how it was only closed for 10 days as repairs were made. While brewery folks thought it would be a one-time creation, it has been so popular that multiple batches have been brewed.

Neither Darla nor I liked the sour beers.

“Sours are for people who don’t drink a lot of beer,” Jair told us.

With it just being the two us, there was an intimacy to the experience that may have been lost if we were with a group.

Todos Santos Brewing is definitely redefining what Mexican beer is all about. Brewmaster Jair said most Mexican beers are lagers, while TSB is more about ales.

The award-winning nano-craft brewery in June will celebrate two years in business. Liz and Ted Mitchell, Aussies who had been coming to the area to surf, decided to open the brewery when they couldn’t find good craft beer here. He had experience making beer, they had a love for Baja Sur. Food followed.

The future is likely to entail a bigger brewing facility so batches can be larger than 100 liters. (This is the equivalent of about 26.4 gallons.) Half kegs fill the cold storage area. TSB has opted for a ton of variety, with not a large stash of each flavor. With so many wonderful options it doesn’t matter if your favorite is out, there are plenty of others to dazzle the taste buds. 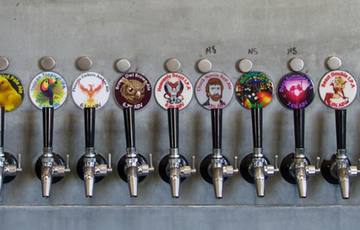 Plenty of choices for beer connoisseurs and novices at TSB. (Image: Kathryn Reed)