While Champagne is always a good go-to for special occasions, sometimes it’s fun to drink something more creative. A cocktail can be so much more festive than bubbly or a glass of wine.

The Honey Deuce was the ideal beverage for enjoying some great tennis. Mom and I indulged in a glass for the each of the U.S. Open tennis finals this past weekend.

We were going to be happy no matter which teenager won the women’s final. The stories of both of these young women are wonderful. Both deserved to win. The men’s final turned out better than I could have expected with it ending in straight sets. 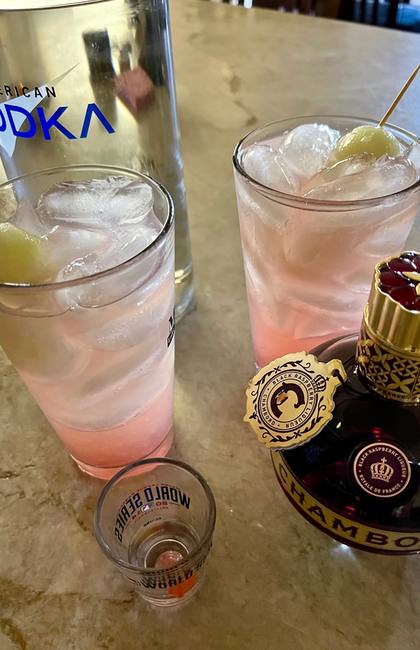 There was plenty to toast.

I’m not sure where I’ve been for the last 15 years because that’s how long the Honey Deuce has been the tournament’s official drink. I only found out about it near the end of this year’s tournament.

The blend of tart lemonade with sweet raspberry Chambord is perfect with a shot or more of vodka. It was so refreshing. It went down a little too easily; but we only had one each day.

I’m notorious for making cocktails that are super strong, so I usually have someone else make them. I think I figured this one out right away. The first day I put in 1½ shots of vodka in my drink, which is what was called for in one of the recipes I had found. The second match I used 1 ounce. It was better with less vodka. But vodka also isn’t my favorite liquor.

I know this will be a drink I’ll be making more often than just when tennis is on the tube.

Definitely have a chilled glass and chill the melon balls. The melon balls, if you use three, are equal to the number of tennis balls in a can. They certainly are optional, but they add to the festiveness even if tennis has nothing to do with why you are serving the drink.